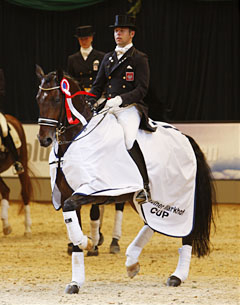 The second place was for Miriam Henschke was back in the saddle of the breeding stallion Lord Sinclair (by Lanciano). The bay stallion, who produced many dressage champions such as Sir Sinclair and Lord Loxley, was purchased at the 1997 PSI auction for the record price of 1.4 million euro by the Swiss John Muller. After Müller's untimely death, Lord Sinclair's owner "on paper" became his breeder Georg Niedermair of Gut Spielberg.