Wayne Channon: Asking for a More Transparent and Objective System of Judging 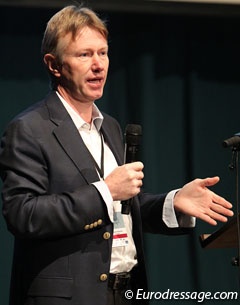 It is wonderful to see that Stephen Clarke, Dressage Judge General, is prepared to publicly discuss the issues I raised in my critique of the 2013 European Championships (ECH). This can only be good for the sport.

My main observation is that Stephen went to great lengths to defend the aberrant score from one judge. The point I think we can all agree on is that the judge’s integrity and experience are not in question but that his interpretation of the ride was, simply, much too different from the other judges. So, his integrity, his diligence, his training and, most importantly, the system failed him. If this were the first time that it had happened, I would have said little except for the English “tut tut”. However, one can point to many examples where this happens at normal shows and championships.

I have only a few comments to make in return and will stick to the essential arguments he presents:

I do take exception with the suggestion that I should spend my time dreaming of ways to raise money for judges' training. Is Stephen seriously suggesting that I should drop my role as the IDRC Secretary General, where I have the responsibility to represent the interests of dressage riders and to promote the interests and image of the sport at the highest levels, and move on to fundraising for judges? I am hoping this was a fatuous, flippant remark and does not demonstrate a disregard for the need for riders to have effective representation.

If I were a judge, I really would not want the current system. It is difficult to be consistently and transparently accurate when using it and the judges end-up having to defend their performance when they are not the ones at fault!

Judges don’t own the problem, it is not their system – it is our system. We all have the responsibility to come-up with a solution. All I ask is that we work together towards a common goal. It will be hard for all of us but the reward from the effort of developing a Code of Points will be that riders have greater clarity on their performance and the judges will have the ability to be more accurate. It must be good for all the actors in this drama.

Related Links
Stephen Clarke: Reflections on Channon's Editorial on the Judging at the Europeans
Wayne Channon: Judging Has to Move into the 21st Century