Come Back II Passed Away 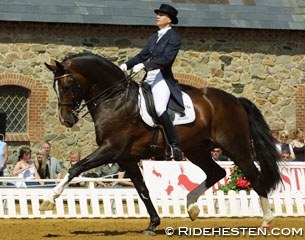 The Holsteiner breeding stallion Come Back II has passed away at age 23. The bay stallion died at his home yard, John Byrialsen's Viegaard stud in Denmark.

Come Back II was born in 1992 and was by Cor de la Bryere x Landgraf I x Montevideo. He was imported into Denmark by Byrialsen as a youngster and approved for Danish warmblood breeding in 1995.

The Holsteiner stallion was trained in dressage by Brigitte Byrialsen, who competed him at international small tour level in 2001 and 2002. The bay stallion was also briefly competed at Grand Prix level by German Hubertus Schmidt. At that time, Byrialsen sold half-ownership to American Carol Cohen. Come Back's Grand Prix career was very short-lived though, as the stallion sustained a career ending injury.

He was a popular stallion in Denmark producing show jumpers and dressage horses. He sired no less than 1811 offspring. His most famous offspring includes jumper Ligitta, who silver at the World Young Show Jumping Horse Championships in Lanaken and became an Olympic team horse for Mexico.