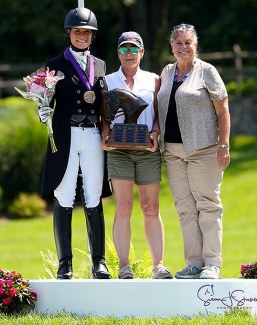 The Dressage Style Award is presented to the rider that has shown “style” throughout the competition, not only when mounted, but also in the form of manners and overall demeanor. The panel of judges that voted on the winners included Ground Juries from both disciplines, veterinarians, Technical Delegates, FEI Stewards, Appeals Committee, and the NAYC Organizing Committee.

The Fiona Baan Memorial Trophy is awarded to the Young Rider in the championships who receives the highest combined average percentage score from the Team, Individual and Freestyle dressage rides. The award is to honor a remarkable woman who dedicated more than 30 years of her life to the United States Equestrian Team and the Young Riders Championships. This award recognizes hard work and the pursuit of excellence in the sport Fiona dearly loved.

The Albers Award is presented annually to the dressage Chef d’ Equipe, named in honor of long time Region 1 Chef d’Equipe, supporter and good friend, Patsy Albers, who best demonstrates the same level of dedication, enthusiasm and team spirit that Patsy has shown throughout the years. This award is open to all of the dressage Chefs d’ Equipe to be nominated by fellow Chefs d'Equipe by submitting a written explanation as to why that chef deserves to win the Albers Award.