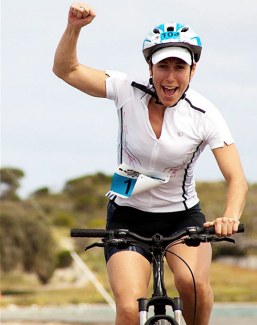 Lucy grew up in Armidale NSW and rode at Pony Club, travelling with her family to country shows and gymkhanas. She has a Degree in Sports Science and has worked in sport at a State and National level in Australia, and at an International level in the United Kingdom.  Lucy boasts more than 16 years of management experience with sporting bodies including the Australian Olympic Committee where she worked at the Rio Olympics in 2016 as Head Quarters Manager for Copacabana overseeing the support for seven Australian Olympic sports, and the London Olympic Games in 2012 where she was a Section Manager.

Lucy has worked as High Performance Manager for Archery Australia. In February 2013, she delivered the ‘Australia’s Winning Edge’ presentation to the Australian Sports Commission and Australian Institute of Sport to secure Olympic cycle funding. With Fremantle Sailing Club, Lucy staged three national championship regattas and most recently as CEO of Dragon Boats NSW, she brought the giant Chinese Trading Hub Alibaba on board as a major sponsor and guided their Australian launch in 2017 on Darling Harbour.

“I’m excited about working with Equestrian Australia and being involved in the grass roots right through to success on the international stage.  I understand the importance of clubs, volunteers, coaches and officials to the future of Equestrian and am attracted by the opportunity to work with such a diverse group of people across the disciplines.   I’m drawn to the challenge of how to take Equestrian to a new level with new ideas and thinking, and financial sustainability,” she said.

“Lucy Warhurst has accepted the challenge of CEO, Equestrian Australia with relish.  She has qualities of personality and ability which well match the vital work to be done…work that cannot wait if our sport is to reach its true potential.”

“Her interest in equestrian sport is significant; her experience, although at the lower levels, is sufficient for her to fully appreciate the challenges which face all our members.”

“Lucy is a straight shooter, who will engage with pleasure with our riders whether they be those who ride and compete for pleasure, or those seeking to represent Australia.”

“EA welcomes Lucy to the significant challenges and pleasures that EA provides. Our community is diverse, interesting and united in our love of horses.  The EA Board wishes Lucy every success in her new venture,” said Fasher.

Warhurst will commence in the role on August 24, 2018 by attending the Equestrian Australia State Branch Forum in Melbourne. This forum will focus on governance structures and the future of Equestrian sport in Australia.