No WEG for Pia Laus-Schneider after Riding Accident 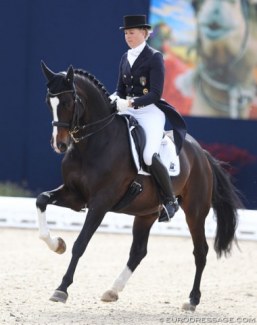 Pia Laus-Schneider, one of Italy's long time leading Grand Prix riders, is out of 2018 World Equestrian Games' contention after sustaining two fractures in a riding accident.

Laus, who is based in Germany, fell off a young horse at home and had to be transported to the hospital. The doctors diagnosed her with two fractures in her sacro-iliac. She will need to take three months rest which rules her out for Tryon.

Laus has been competing her one Grand Prix horse, the 12-year old Mecklemburger bred Shadow (by Sancisco OLD x Lagoheider G), at international Grand Prix level since 2015. In previous years, the rider expressed no interest to represent her country Italy at the major international championships despite good scores that qualified her for the Italian team straight away.

This year, however, she was up for consideration for the 2018 World Equestrian Games. She competed her black gelding at CDI's in Dortmund, Hagen and Wiesbaden this year with scores between 67.95% and 71.29%.