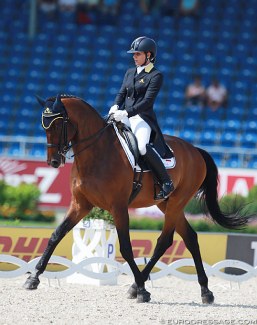 Italian Grand Prix rider Micol Rustignoli has decided to retire her 19-year old Corallo Nero from international competition sport. The pair competed in its last show together at the 2018 CDI Nice on 2 - 5 August 2018.

Corallo Nero is a Italian bred sport horse by Sherwood out of Landfee (by Landadel).

The 1999 born gelding began his international career under Valentina Truppa at Grand Prix level in 2008. The pair made its CDI big tour debut in Vejer de la Frontera, Spain, in February 2008. After a light competition year in 2010, the horse disappeared from the scene for a while.

He returned in the spring of 2011 under his new rider Micol Rustignoli, a student of Italian judge Enzo Truppa. In 2012 the duo contested the Under 25 classes in Vidauban as well as some world cup classes and the senior big tour.