Dance with Me, Price Highlight of the 2018 Klosterhof Medingen Auction 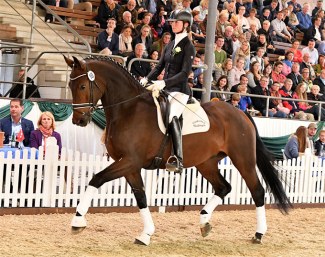 The bright bay Dance with Me became the price highlight of the 2018 Klosterhof Medingen auction in Bad Bevensen, Germany, on 29 September 2018.

The 4-year old Dance with Me (by Danone x Weltruhm x Lanthan) , who is bred by Ulrich Henke, sold for 240,000 euro to a German client.

The 4-year old chestnut gelding For Honour (by Don Olymbrio x Londonderry), bred by the Swedish Karin Mattson, sold for 220,000 euro to a German customer.

The most expensive foal was the Belgian bred Bertoni (by Borsalino x De Niro). Bred and owned by Pure Equestrian Stables in Wolvertem, Belgium, Bertoni sold to Denmark for 55,000 euro.

The chestnut filly Bond Girl (by Borsalino x Fidertanz), bred by Elisabeth Wegert and owned by Raphael Wegert, sold for 50,000 euro to the Ukraine. Hed Honey (by Helium x Christ) also moves to the Ukraine for 40,000 euro, as well as Queen of Hearts (by Quantensprung x De Niro) for 27,000 euro. The same price was paid by Brandenburg clients for Balou Bel (by Borsalino x Hohenstein).