Where are They Now? Don Davidoff 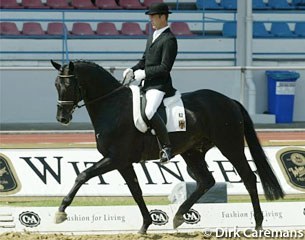 At the World Young Horse Championships in 2002 in Verden, a stunning black beauty impressed the judges and crowds and earned the World Champion's title for young dressage horses. His name was Don Davidoff. In 2005 the licensed Oldenburg stallion  sold to the Bechtolsheimer family but never returned to the international stage. Where is he now?

Bred by Wilhelm Büsing in Germany, Don Davidoff was an Oldenburg licensed stallion by Don Gregory out of Toska R (by Rubinstein).

He was originally named Davidoff E.

The black was initially rejected at the 1999 Oldenburg Stallion Licensing. He did his 30-day performance test in January 2000 though and scored 8.93 for dressage and 8.61 for show jumping. In September 2000 the stallion won the Bundeschampionate for 3-year olds under Heinz Jorg Wachter. Owner Ann Kathrin Ehlen re-presented him at the 2000 Oldenburg Licensing three months later and this time the licensing committee did accept him. At the licensing Ehlen sold an ownership share sold to Paul Schockemoehle.

In 2005 Don Davidoff sold to Wilfried and Ursula Bechtolsheimer as a future FEI hopeful for their then young Grand Prix rider daughter Laura Bechtolsheimer, but the stallion completely disappeared from the scene.

Where Is he Now?

Don Davidoff moved to the U.K. where Markus Gribbe, who was a trainer at Bechtolsheimer's yard at the time, took on the ride. The same year Gribbe showed Don Davidoff at national small tour level in Great Britain, but there was never a big international break through. The stallion struggled with fitness issues.

"He never made it due to ongoing injuries," Laura Tomlinson-Bechtolsheimer told Eurodressage. "Big horse, massive mover and did way too much as a young horse; both work and breeding wise."

"I remember he was a super horse, sensitive and a very good boy," Gribbe told Eurodressage. "He had everything to go to the top."

As a breeding stallion Don Davidoff always struggled with fertility and he was only successfully bred to a few mares. He sired two licensed sons in Germany (Daddy Cool, Davidoff's Hit both born in 2002). Thirty-six daughters are registered as a brood mare and two of them are State Premium Mares. His most famous offspring in sport is without a doubt, Tinne Vilhelmson's Olympic horse Don Auriello (by Don Davidoff x White Star), but there is also Anna Katharina Gerber's Grand Prix horse Farrah Donna (born 2003). Double World Young Horse Champion Sa Coeur (by Sir Donnerhall) and international Grand Prix horse and PSI Auction price highlight Don Nobless (by Dancier) are out of Don Davidoff dams.

Also in the U.K. the Bechtolsheimers were unable to successfully stand him at stud or even get a few mares in foal.

"His semen wasn't good so he struggled to get many foals. He had to cover loads to try and get the mares in foal and he paid," Laura explained. "This may have contributed to his struggle with injuries."

Don Davidoff was euthanized in 2017.

"He was put down due to lameness," Laura told Eurodressage. "He had been out in our OAP herd since he stopped training years ago. I was sad as he was a beauty and had a great temperament."