Licking and Chewing: Submission or Stress? 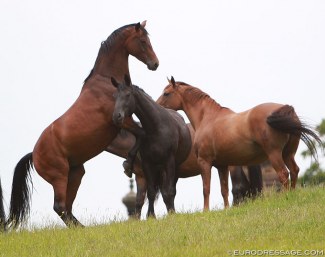 Horses sometimes lick and chew during training and this has often been interpreted as a sign that the horse is learning or showing ‘submission’ to the trainer. However, a new study suggests that this non-nutritive licking and chewing behaviour is a natural behaviour that is shown after a stressful situation.

To gain insight into the function of licking and non-nutritive chewing behaviour in horses, a team of equine scientists from the Norwegian University of Life Sciences observed the social behaviour of feral horses under natural conditions.

The team wanted to investigate whether non-nutritive chewing was performed to signal submission to another horse and also to study whether horses performed the behaviour in between stressed and calm situations.

To find out whether non-nutritive chewing was performed to signal submission the researchers tested the idea that when one horse (the aggressor) approached another horse (the recipient) in a threatening manner, the recipient but not the aggressor would perform the behaviour. The team observed and recorded different behavioural sequences that involved aggressive interactions (for example if one horse herded or threatened another) and recorded whether the chewing behaviour was performed by either horse.

The results were fascinating: the team found that the chewing behaviour was performed by both the approaching and the recipient horses. Non-nutritive chewing was actually performed more often by the aggressor than the recipient, refuting the assumption this behaviour is a submissive signal.

The results of this study suggest that non-nutritive chewing was not used as a submissive signal by horses in the contexts observed, but it occurred after a tense situation, likely as a response to a dry mouth.

The research team acknowledge that further research is required to measure the stress responses associated with non-nutritive chewing. However, this study does highlight that licking and chewing likely occurs after a stressful situation and may be used as a behavioural indicator that the previous situation was perceived as stressful by the horse.

“We looked at feral horses living with as little human interference as possible to see how they behaved in their natural habitat," said researcher Margrete Lie. "It was important to look at completely natural behaviour and therefore we wanted to see horses living without restriction. These horses were living in a 334 km2 national park, and in the area we observed there were a little under 200 horses. No stallions had been removed from the population as is so common in domestic horses.”

“It was interesting to see how often the horses performed the chewing behaviour and also how clear it was that all individuals did chew – not only ‘submissive’ individuals.”

“The study showed that the horses were chewing between calm and relaxed situations, but it does not say if chewing comes as a response to relaxing or if chewing helps them relax. To able to look at this more closely I believe a more controlled study with stress measurements is needed.”

Related Links
Behavioural, Clinical and Respiratory Responses to 8-Hour Transportation in Horses
Classical Training: What is Relaxation?
A Slip of the Tongue