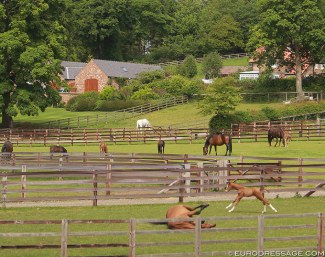 While there is much focus on the stallion in horse breeding, the impact of the mare has sometimes been overlooked, especially when it comes to the development of stress sensitivity, learning capacity and fearfulness in the offspring.

A large number of research projects on horses and other species have shown that the effects of the mare are much stronger than the effects of the stallion for these traits. The stallion’s impact on the behavioural development of the foal are limited to genetic effects; however it is known that while a foal may be born with tendencies to react in a certain way, its behaviour will develop in interaction with environmental factors. Maternal effects on the foal are both genetic, pre-natal (i.e. during pregnancy) and post-natal (i.e. after birth).

During pre-natal development, the fetus is vulnerable to a broad range of environmental exposures through the action of maternal hormones on foetal brain development, with consequences that can persist into infancy, adolescence and adulthood. In particular, maternal distress during pregnancy, in the form of exposure to acute or chronic stressors, can produce lasting physiological and behavioural changes in the offspring, including learning deficits and increased fear-related behaviour. In social species, social stressors such as isolation, instability of the social environment or high population density during pregnancy have been shown to affect behavioural profiles with offspring of socially stressed mothers showing an increase in fear-related behaviour.

Post-natal effects on fearfulness are mediated by the quality of the mother-infant interactions; high levels of active maternal care have been associated with lasting reductions in fearfulness and stress reactivity and increased learning performance in the offspring, whereas inconsistent maternal care and maternal anxiety lead to increased fear-related behaviour in the offspring. These effects show that the quality of the early-life environment can change the activity of genes, thus illustrating the dynamic interplay between genes and environmental experiences in shaping behaviour.

A number of recent studies on horses have illustrated that mares also influence their foals though direct social transmission of behaviour; i.e. the foals sees how the mother reacts in various situations and tends to copy her reactions when exposed to similar situations later in life. This is not only a genetic effect since mares trained to react in a certain way are likely to pass these reactions on to their foals.

In conclusion, breeders are encouraged to acknowledge the large impact of the mare on behavioural development in foals. Thus, stressful situations should be limited during pregnancy; mares that show active maternal care are likely to produce more stress resilient foals; and mares that show calm behaviour and interest towards humans and novel objects are likely to pass these traits on to their foals.

Related Links
Winther Christensen: "Equestrian Sport: the good, the bad and the ugly – and where next?"
Data Collection for Danish Rider Weight Study Completed
Bernard Maurel: "Can Scientist, Riders and Trainers Understand Each Other?"