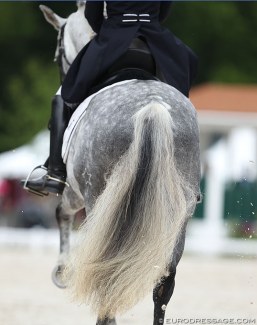 Professor Hilary Clayton and researchers Hampson, Fraser, White and Egenvall conducted a study in which they compared rider stability in a flapless versus a conventional saddle. They presented their findings at the 2018 ISES Conference in Rome, Italy, in September.

A saddle is used to improve the rider’s safety, security, and comfort, while distributing forces exerted by the rider and saddle over a large area of the horse’s back. This study investigated the effects on rider stability of an innovative saddle design that differs from a conventional saddle in having no flaps, so the rider’s legs are separated from the horse’s ribcage only by a soft, flexible saddle pad.

Spatiotemporal kinematic data were measured from 30Hz sagittal-plane video recordings. Pressure on the horse’s back was measured using an electronic pressure mat with 60 Hz recording frequency. The pressure data were used to determine the position and movements of the rider’s centre of pressure, which represents the centroid of pressure distribution on the horse’s back. The data strings were split into strides, with 5 strides analysed per horse/gait/type. For each stride the path of the rider’s centre of pressure was plotted, maximal and minimal values in the anteroposterior and mediolateral directions were extracted, and ranges of motion in each direction were calculated. These variables were transformed along the ladder of powers with the most normal transformations being selected based on plots and descriptive statistics. Anteroposterior data were normally distributed, mediolateral data were negative, inverse, square-root transformed.

Data comparisons between the two saddles at the collected and extended walk, trot, and canter were explored using mixed models with gait and saddle as fixed factors, including their 2-way interaction, and with horse as random effect. Speed and stride length of each gait did not differ between saddles. Compared with the conventional saddle, the flapless saddle showed significant reductions in range of motion of the rider’s centre of pressure in the mediolateral direction in all gaits (P-value range 0.04-<0.0001, T-value range=2.02- 6.67; DF=260) and in the anteroposterior direction in collected trot (P=0.04, T=2.11; DF=260), exten- ded trot (P<0.0001, T=4.17; DF=260), and extended canter (P<0.05, T=1.98; DF=260).

When riding with a flapless saddle, the more adducted position of the rider’s thighs was thought to facilitate the action of the lumbopelvic-hip musculature in stabilizing and controlling translations and rotations of the pelvis and trunk. A stable rider can give aids that are more consistent and predictable for the horse.

The rider needs stability in the saddle both for safety and to apply consistent aids. We compared rider stability in a conventional saddle versus a saddle with a tree but no flaps. When riding in the flapless saddle the rider’s position remained more centred from side-to-side in collected and extended walk, trot and canter, and had smaller front-to-back oscillations in collected trot, extended trot and extended canter. The enhanced rider stability in a flapless saddle is likely to have a positive impact on equine welfare, and the closer contact between rider and horse may facilitate applying light and consistent aids.

When Eurodressage asked Clayton what type of flapless saddle was used, Hilary replied it was a saddle with "the flap entirely gone, but there is a pad between the leg and the horse, which is very comfortable for riding. It puts the rider's leg very close to the horse and this seems to facilitate the activation of the rider's pelvic stabilizing muscles making the rider's position more stable and centered. The saddle comes with a thin flap that is easily attached for competitions."