Gerald Martinez: "Why I Stop with Embryo Transfer" 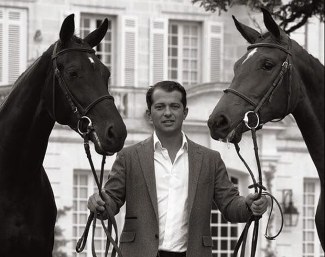 Guest columnist of the week is Gerald Martinez, general manager of Haras de Malleret, one of France's leading dressage breeding farm and stallion stations. Martinez has made the conscious choice to no longer use embryo transfer as a reproduction methods for his mares.

"Why I Stop with Embryo Transfer"

I actually decided to stop with embryo transfers after the 2018 season because I was able to see the problems that this caused to my biological mares. We realized that the mares were in depression. We noticed it more or less in their character or in their resistance, but all of them were depressed. After being flushed they stood in the corner of their stalls with their heads of down.

It really saddened me and I did everything to help them to recover : they saw the osteopath several times, got massages from our physiotherapist. With the time and attention that we dedicate to them, I felt that they were doing better, but the after-effects were still present on some of them.

Take my excellent mare Farouche de Malleret, the 3-year old French Champion: I didn’t want to stop her training, so I did embryo transfer with her. Since then, she began to spin, because she wasn't feeling well and almost died. After being flushed, she  developed a cribbing habit and suffered from colic symptoms. We managed to save her by a hair, so I decided to let her free. She now lives in the fields and is carrying her own foals.

Embryo transfer it too invasive for the mares. In fact it is just common sense: when the mare's body is ready to give life, we stop the evolution by manual interference, flush them and the mare experiences it as a miscarriage. Under saddle the mares showed us signs they never had before: rigid in their bodies, ears flattened, swooshing tails and they were just less sociable in general.

It is certain that it is very difficult to stop embryo transfers on mares when we see the extreme quality of their foals. This was the case for our mares Filarmonie or Sadira, we had 2 fantastics foals each by embryo transfers. But from now, they will carry their next foals when their sport career will be over. For the business, these are hards decisions for me but I respect my horses and I can not pretend everything is normal. I would have liked to have been warned before, but I now I made my own experiences and my mares too, unfortunately.

I now have several mares that I have decided to carry their own foals and I got the incredible opportunity last year to partner with Ekke Thaden. This is for me and for the Malleret breeding farm an exceptional chance. He chose me and wants to continue his incredible breeding programme with me, so he merge with Malleret and me, this young breeder from the French Bordelais area. Ekke respects and loves his horses the same way. He could have or could sell his extraordinary brood mares for top prices. He has had offers and continues to receive them, which only few people would be able to reject, but ones doesn’t sell his own blood.  He is humble and vibrates with passion for his horses. There are only a few rare people like him who give themselves 100% and manage to breed exceptional horses.

Genetics is the base, but love for horses makes the difference!