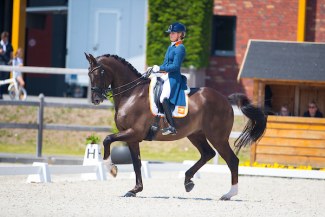 Dutch A-team rider Anne Meulendijks made a winning international show debut on her brand new, second Grand Prix horse Edison at the 2019 CDI Kronenberg in The Netherlands on 7 - 8 June 2019. The pair danced to victory in Saturday's kur to music.

The CDI Kronenberg is a brand new international dressage competition hosted at equestrian De Peelbergen near Venlo, The Netherlands. The venue has hosted international show jumping competitions before but this is their first CDI and it co-incides with a para dressage CDI.

Aboard the Fiechter family's 10-year old Dutch warmblood Edison (by Johnson x Balzflug), Meulendijks started off with an 8th place in the Grand Prix on  68.826%. In the Kur to Music, the pair upped the ante and posted 73.400% for the victory in the freestyle, ahead of Swedish Michelle Hagman-Hassink on Gestut Sprehe's licensed stallion Destano (by Desperados). Anne rode to music borrowed from Edward Gal as she does not yet have her own music for Edison.

"It was out fourth show together so we don't know each other 100% yet," Meulendijks told Eurodressage. "That is why there were a few tension issues because of the (windy) weather. Today I was better prepared so we could produce a much better freestyle. We've only been a combination for a short time and still need to get to know each other. But he's such an incredibly cool competition horse."

Edison is bred by the Swanenberg family. In 2016 he was shown by Michelle Vacquier and in 2017 by Yvonne van den Brink-Fiechter at national level in Holland. The stallion is owned by Fiechter and Van Woudenberg, who have given the ride to Meulendijks. The liver chestnut stallion has been once presented by Anne's younger sister Lotte in a pas de deux, but Anne took over the ride in February.

A pair for less than five months, Anne and Edison had heir show debut at the national in Uden mid April and swept the Inter II with 71%. They have been going from strength to strength and won the consolation finals in the Grand Prix Special at the 2019 Dutch Grand Prix Championships in Ermelo on 71.638%.

"I didn't expect to win," said Anne about her international Kur victory in Kronenberg. "I know that Edison is a very good horse, but he's still young and inexperienced at this level. A lot can still happen, but he gives a great feeling so I know there is much more in the tank."

A-squad listed with her top ride Avanti (by United), Anne now has two irons in the fire for international Grand Prix.

"I hope to take him along with Avanti and that we can experience many nice moments together," said a modest Anne about her future plans with Edison.