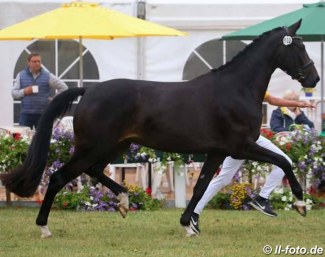 Flora (by Furst Belissaro x Don Crusador) was named the champion in the dressage division at the 2019 German Mare and Foal Championship in Lienen, Germany, on Sunday 14 July 2019.

The Hanoverian verband celebrated a powerful success in Lienen with the top three in the Mare Championships all being Hanoverians.

Heinrich Ramsbrock's Hanoverian mare Diva (by Diamond Hit x Furst Heinrich) scored the bronze with an overall total of  8653 points. Horse dealer, stallion owner and breeder Ramsbrock had no less than 3 mares in the top 10.