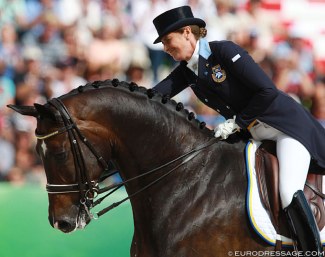 Don Auriello, Sweden's number one international Grand Prix horse from 2012 till 2016, will be retired from competition sport in a special ceremony at the 2019 CDI Stockholm on 1 December 2019.

"He’s been my companion for 9 years. He’s the horse that I had the most individual success with," Tinne Vilhelmson told Eurodressage.

Bred by Joachim Poppe, Don Auriello is by Don Davidoff out of Wey O Mey (by White Star).

He was originally owned by Klaus Hermann Ehlen and competed as a youngster by Birgit Wellhausen-Henschke. The pair was 5th in the consolation finals at the 2007 World Young Horse Championships in Verden and one month later placed 15th in the finals at the 2007 Bundeschampionate in Warendorf. At the 2008 Bundeschampionate they were only 25th in the preliminary round and did not compete in the consolation finals. Henschke trained Don Auriello up to Grand Prix level and competed him in the 2010 German national Medien Cup (Louisdor Cup for Developing GP horses now) before the horse sold to Sweden in the autumn of 2010.

Tinne Vilhelmson's long-time sponsor Antonia Ax:son Johnson acquired Don Auriello as an extra iron in the fire for Tinne to ride alongside Favourit and Divertimento at the time.  He became her career making Grand Prix horse.

Don Auriello made its international Grand Prix debut in February 20122 in West Palm Beach and became Sweden's team anchor between 2012 and 2016!

Don Auriello struggled with injury for a long time after the Rio Olympics but returned to fitness in 2018 and went to the WEG in Tryon. in 2019 he competed in a few CDI-W's in Wellington, Florida and finished his show career at the 2019 World Cup Finals in Gothenburg on home turf last April. It was his last show.

"He would never ever let me down and he has given me more confidence in the arena! His charisma and willingness to work and show are incomparable and unique!," Tinne replied to the question in what way Don Auriello was special to her. "He absolutely loves the attention from the big crowd."

Don Auriello was a strong Kur to Music performer and was ridden to custom made Cees Slings' compositions. Slings is now composing a special musical Farewell Tribute for the retirement ceremony in Stockholm on 1 December 2019.