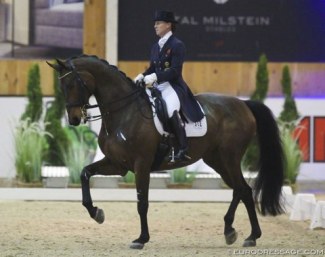 Emma Hindle was indomitable in the Big Tour classes at last week’s Keysoe CDI in Bedfordshire, Great Britain, on 4 – 6 October 2019.

The prolific Grand Prix rider, who has Senior European team medals to her name and was highest placed Brit at the 2008 Olympic Games, won both Friday’s Grand Prix and Saturday’s Grand Prix Freestyle with her current top ride, Romy Del Sol.

Emma and the 13-year old Romanov x Danny De Vito mare, who’ve shown consistency all year on the continent with top placings at Lier, Nieuw en Sint Joosland, Compiègne and Wiesbaden, took the Grand Prix in convincing style. A score of 71.13% was theirs to give them a clear lead in front of Sadie Smith with Keystone Dynamite (68.91%), making their CDI debut, and Rebecca Hughes with Rubini Royale (66.17%) in third.

Saturday night at Keysoe, all eyes were on the Grand Prix Freestyle. Once again, Emma and Romy Del Sol put on a show-stopping performance - this time to their Lady Gaga-inspired freestyle soundtrack. They showed good regularity, power and suppleness through piaffe turns, steep half passes and one and a half turn pirouettes, all presented with an overall picture of harmony for 73.30%, and victory, the elegant mare appearing to have matured and strengthened over recent months. Sadie Smith held her own once again to take second, and Maria Eilberg and Royal Concert put up a superb challenge with a Gary Patterson-produced Rod Stewart compilation for a very close third.

In the Small Tour, Gareth Hughes so impressed with his own and Judy Firmston-Williams’ young talent, Sintano Van Hof Olympia (by Sandro Hit). The exciting partnership, who won the National Inter I Championship at Stoneleigh, dominated with identically scored wins of 73.94% in the PSG and Inter I, then a cracking 76.38% in the Inter I Freestyle.

“He is such a talented horse and we are excited about his future,” says Gareth. Next stop for the pair – Le Mans CDI in France.

Lewis Carrier and his 2018 European Young Riders Championship horse, Diego V, continued to display their U25s promise with second in the U25 Inter II, and wins in both the U25 Grand Prix and Freestyle.

“After a bit of a slow start to our Keysoe CDI in the Inter II on the first day, we ironed out a few silly mistakes to come away with two out of three wins in the U25 Grand Prix and the Grand Prix Freestyle,” said Lewis on Facebook. “Almost again hitting that 70% but were denied by our 1s [one-tempi changes] today.

“[I’m] Looking forward to coming out next year after a winter’s training as I know our piaffe and passage are nowhere near where they need to be to compete at the top level, but pleased to get decent scores and have a great start to our U25 campaign.”

Great Britain’s Sarah Khairallah and the evergreen Dimaggio-sired mare, Darling (19), were outstanding winners of the Young Rider Team Test with 68.725%, but it was Clare Hole who rose to the top in the Individual and Freestyle, winning both with her mother Rachel Murray’s Winnetou GEP (Gribaldi x Donnerhall) with scores of 68.48% and 71.13%.

British Junior, Maddy Frewin, brought a touch of Bollywood to Bedfordshire with her 72.65% winning Freestyle aboard Woodlander Rhythm ‘n’ Blues, which followed a Team Test win and second place to Jessie Kirby and Belle Amie who scored 68.77% to win the Individual.

In the Pony riders’ tournament, Ireland's Martha Jobling-Purser was victorious in the Team and Individual Tests with Yorkie Jobling-Purser’s Valido’s Starlight. Martha and ‘Star’, who competed as individuals for Ireland at this year’s Pony European Championships, delivered two winning tests with 69.381% and 70.76%.

British combinations, Gracie Morgan and Ella, and Betsy Smetham with Amber were in hot pursuit in the Pony Team Test, but each day, Dutc Syrah Van De Rovaart and Donna Daria made up ground to ultimately top the Freestyle podium for the Netherlands on a score of 71.16%.