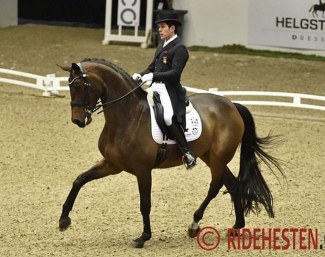 The 2019 CDI-W Herning on 18 - 20 October 2019 will not only be the Western European League World Cup season opener for 2019-2020 but it will also be the come back event for three well known horses that have been missing in action.

Seven months after making her CDI debut at Grand Prix level,  Fiontini will make her return to the arena at the same location. Spanish Severo Jurado Lopez will ride Helgstrand & Evo's 9-year old Danish mare (by Fassbinder x Romanov) at her second international of 2019.

Triple Young Horse World Champion Fiontini went straight from winning the 7-year old World Championship for developing Prix St Georges horses in 2017 into the senior big tour at Grand Prix level as a 9-year old, a year and a half later in March 2019 . After scoring 75.913% in the Grand Prix and 80.185% in the freestyle at Herning, the mare injured herself. Fiontini is now fit again and ready to meet the crowds in Herning.

Another come back kid in Herning is the 12-year old Hanoverian gelding Duke of Britain (by Dimaggio x Rubinstein). Frederic Wandres and the chestnut gelding had a stellar World Cup season last year and just missed out on a World Cup Finals place due to a country quotum. In the spring of 2019 they showed at the CDI's in Hagen and Hamburg, with the latter event on 1 June being their last. Wandres and Duke of Britain are now back and ready for another attempt to qualify for the World Cup Finals with a first start in Herning.

There was much longer pause from the show ring for Danish 2018 WEG team horse Belstaff. Under Danish Betina Jaeger, the 12-year old Hanoverian by Brentano II x De Niro represented Denmark at the 2018 World Equestrian Games in Tryon, U.S.A., where they finished 31st in the Grand Prix. After Tryon, Belstaff sold to Korean Dong Seon Kim, but he never took the horse into the CDI ring. Kim relocated from Germany back to his home country Korea and Jaeger is now back on board of Belstaff and they are entered for the 3* tour in Herning.

View the complete participants list for the 2019 CDI-W Herning here.