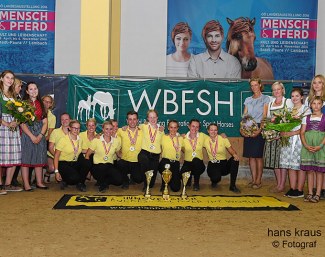 Each participating studbook has the option to enter 4 individuals in both senior (20-25 years) and junior (16-19 years) age classes. In this case the best three individual scores comprise the team score for that studbook in the age class. It is also possible for a studbook to enter only three individuals to comprise a team or optionally to just enter individuals. 71 seniors and 68 juniors competed at the championships with German young breeders coming out on top in both age classes.

In both age class team rankings the Holsteiner teams were silver medal winners.

The junior team bronze medal went to Brandenburg-Anhalt, while the organising association from Austria, the Central Association of Austrian Horse Breeders, achieved the bronze medal in the seniors.

Success in the theory phase of the championships laid the foundation for a successful overall result. Five of the six individual medal winners achieved 100% in their theory tests

In the individual rankings all medals went to German breeding associations. In the juniors Laura Schuldt (Hannover) won gold ahead of Nele Habermann (Hannover) silver and Marie Jurga from Brandenburg-Anhalt bronze. Among the seniors, Leonie Tronnier from Rheinland-Pfalz/Saar won gold ahead of Johanna Boysen from Holstein silver and Wiebke Poppe from Hannover bronze.

In the individual disciplines of conformation assessment and athleticism assessment the medals were earned by a variety of breeding associations:

Alongside the competition, the meeting of the International Young Breeders' organisation (IYB) took place, which celebrated its 10th anniversary this year.

Carolin Kathmann of the Oldenburger Verband was re-elected in her office as a treasurer. Vice President Lieve de Greeff of the Belgium Warmblood association was also re-elected in office. The President of the IYB Inken von PlatenHallermund thanked Verena Nowak, President of the Austrian Young Breeders, for the excellent preparation and delivery of the event:

"A worthy World Championships, everyone felt very welcome. Performances in the supporting programme have given everyone an impressive insight into the diversity and tradition of Austrian horse breeding."

In 2021, the World Championship will be held by the Royal Dutch breeding association KWPN in Ermelo, Netherlands.