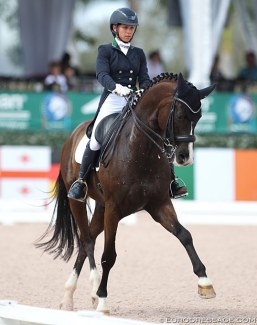 Sao Passionato is a 10-year old Oldenburg stallion by Sir Donnerhall out of Amelie (by Friedensfurst x Rocher d'Or).

He is bred by Ludger Buehrmann and is a full brother to the American owned small tour horse Apasionata (Steffen Peters, Tracey Roenick). He was originally owned by Uwe Timme.

The dark bay was approved at the 2012 Oldenburg Saddle Licensing and was competed in Germany only once in 2013 by Christine Nieberg.

Sao Passionato resurfaced in 2017 across the Atlantic. Now owned by the Wellington, Florida, based Mexicans Marisol and Patrick Bursenns, the horse made its CDI debut at small tour level at the 2017 CDI-W Saugerties. Under Monica Burssens he placed 6th in his first international Prix St Georges (66.491%).

In 2018 Monica and the Oldenburg competed at the Global Dressage Festival in three CDI's before moving back to Mexico, where Monica rode him in one CDI in Mexico City (63.412% in the Prix St Georges), befopre Mexican Marcos Santiago Ortiz Diez took over the ride. He showed the horse in two further CDI's in Mexico City in May.

A gelded Sao Passionato has now been shipped to Holland to be further trained and competed by Nars Gottmer. The pair made its show debut at the regional show in Beilen on 1 - 3 November 2019. They scored 62,120% in the Grand Prix.

I already rode him as an 8-year old and had a tremendous connection with him," Gottmer told Eurodressage. "Patrick and Marisol are clients and good friends of Matty Marissink and I. We agreed that if he could do the big tour work that I would continue riding him. For now I'll keep training Sao and put some mileage on him and eventually he'll be sold."