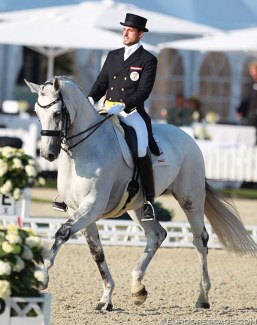 Austrian Manuel Springhetti and Swedish Lydia Jordan have joined the riders' team at Van Olst Stables in The Netherlands.

Horses.nl reported the arrival of the two new riders at Van Olst stables. Springhetti replaces Franka Loos, who recently decided to set up her own business.

The 29-year old Springhetti competed at international Grand Prix level until March 2017 on Fritz Gaulhofer's Donnerbube Junior. The Austrian then moved to Denmark, where he worked at Helgstrand Dressage.

This year Manuel made headlines when he became the highest scoring rider on Helgstrand's Jaristo (by Dream Boy) at the Austrian selection trial for the 2019 World Young Horse Championships. Afterwards the Austrian Federation blocked his entry for Ermelo, because Springhetti had not paid for his national rider's license, even though he was accepted by the federation to compete at the selection trial without his paper work in order. The federation then decided to send Francois, which is owned by the Austrian FN's secretary general. The horse finished second to last in Ermelo. Jaristo has moved to the U.K. to be trained by Emile Faurie.

The 26-year old Swedish Lydia Jordan began her professional career as a rider in Sweden before moving to Germany in 2013. She first worked for Alvaro Osborne and since 2016 had been working at Holga Finken's yard in Hagen. She has not yet competed at international level, but most recently showed horses such as Flemmingh, Happy Highness,  and Special Blend at local shows in Germany. In 2018 she rode Furst Willi in the qualifiers for the Bundeschampionate.

Springhetti has taken over the ride on stallions George Clooney (by De Niro) and Crosby (by Chippendale), which have previously been shown by Van Olst's number one rider Charlotte Fry.