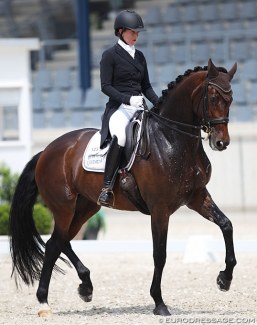 Anne Beth is a 15-year old Dutch warmblood mare by Oscar out of Macbeth (by Corleone). She is bred by Gert-Willem van Norel.

Under Emmelie Scholtens she finished fourth in the 2009 Pavo Cup finals as a 4-year old.

Anne Beth made her first claim to fame when she represented the KWPN society under Vai Bruntink at the 2010 World Championships for Young Dressage Horses in Verden, Germany, where they finished 14th in the Finals.

Under Dutch team rider Diederik van Silfhout the bay mare made its international show debut at small tour at the 2013 CDI Roosendaal, where she won the Grand Prix. The combination competed at small tour level through 2014 after which she sold to German aspiring Grand Prix rider Lisa Müller.

Trainer Isabell Werth briefly took over the ride in 2017 and trained Anne Beth to Grand Prix.

In 2018 Müller was back in the saddle and did two CDI's, Munich and Aachen Dressage Days. Their last competition was a national one at Gut Riedhausen in June 2018 after which Anne Beth disappeared from the shows season.

The now 15-year old mare has given birth to her first foal, a filly by Furstenball. Müller announced the news on Instagram and the newborn foal has been nicknamed Fetzi Betzi.