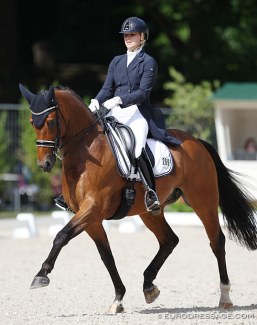 Dutch Under 25 rider Jill Huijbregts has lost her number one competition horse Zamacho Z, which was recently retired early from sport in 2018 due to health issues.

Zamacho Z was a 16-year old Dutch warmblood by Rousseau out of Jeria (by Rossini). He was bred by P Bijvelds.

Jill Huybregts purchased the gelding as a 3-year old and trained him up to Grand Prix level.

The bay made its international show debut at junior level at the CDI Zwolle when the horse was still to turn 7. They showed in Zwolle, Roosendaal and Saumur, but already got their feet wet at Young Riders level at the national cross borders event in Beek in November 2011.

They moved up to young riders level in 2012 and rode in Babenhausen and Leudelange. The year 2013 started with CDI Addington in Great Britain, followed by Saumur and Compiegne. They skipped the summer CDI's, and returned for the CDI Roosendaal Indoor in December that year.

In 2014 they did the same show strategy with Addington, Nieuw en St. Joosland, Roosendaal and Compiegne in spring, then stayed home in the summer, and returned for the Roosendaal Indoor show, where they moved to Under 25 Grand Prix level.

From 2015 through 2017 the pair competed at numerous international shows in the Under 25 division, traveling across Europe to Munich, Hagen, Lier, 's Hertogenbosch, Rotterdam, Mannheim, Odense, Darmstadt, Le Mans, and Gothenburg. They were appointed Dutch team reserves for the 2016 European Under 25 Championships in Hagen.

Their final international was in October 2017 at the Le Mans indoor competition where they won the Intermediaire II and Short Grand Prix in the U25 division.

Koen Gomes reported that the now 26-year old Huijbregts wrote on Facebook that Zamacho Z had been suffering from lymphoma and was therefore retired to the field. Unfortunately his condition worsened and he had to be put to sleep.

"I have no words for how much you meant to me," said Jill. "This was the only thing I could do for you, after you had given it your all these years. Sleep tight 'matsieflatsie', my everything, no horse will ever be able to replace you."

Huijbregts is contuining her show career on Grand Prix horse, Enzos Armani (by Tuschinski x Tango), which she began showing internationally at small tour level in 2016 and at Under 25 Grand Prix level as of October 2017.