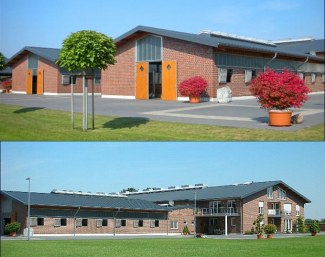 German professional dressage rider Kirsten Heek has sold her fabulous farm, Roy Blue Stables, to Alexander Brenninkmeijer who with his life partner Borja Carrascosa have made the step to total independence to build a future and business of their own.

Roy Blue Stables was built by Heek's parents Franz- Josef and Elke in Coesfeld, Germany, in 2005.  The property is a state-of-the art equestrian facility with all possible amenities and Kirsten ran her dressage and breeding business there.

Still in pristine condition, the property was listed for sale for 4.7 million euro with the real estate agents.

Roy Blue Stables, New Base of Brenninkmeijer and Carrascosa

Alexander Brenninkmeijer, a distant heir of the famous Dutch-German Brenninkmeijer family of Cofra Holding, and Spanish WEG team rider Borja Carrascosa made an offer on the yard in November 2019 and it has been accepted.

Roy Blue Stables will now be their step to total independence and to build and develop their business and future.

The couple met each other while working at Hof Kasselmann in Hagen.  In 2015 they decided to start their own business at Gut Auric in Krefeld, under the wings of trainer Jan Bemelmans.

Between then and now Carrascosa proved his worth as a young horse trainer and Grand Prix rider. He was Spain's team reserve for the 2016 Rio Olympics on Wonder and competed at the 2019 European Dressage Championships in Rotterdam with Ein Traum.

Kirsten Heek was a successful international young rider in the early 1990s on Roy Blue, which her parents bought through Bernhard Ix at Egbert Kraak's in The Netherlands. She won team gold and individual bronze at the 1993 European Young Riders Championships and was trained by Katrin Bettenworth. Heek's next horse was Allegro Assai with whom she competed at national grand Prix level while training with Johann Hinnemann.

In 2005 construction of Roy Blue Stables completed and Heek had her base there ever since.  With the Danish warmblood Maxim (by Mago xx x Alibi), which she bought at Margit Orum's yard, she competed at CDi's in Vestfold, Stadl Paura and Marianske Lazne in 2008. Her last CDI was in Strassen in July 2009, where she rode Morning Star (by Meilenstiefel x Lungau) and Palermo (by Gribaldi x Ferro).

Heek only competed nationally since then with her focus shifting also to training students. She is the coach of Thailand's two most successful riders Pakira Thongpakdi and Arinadtha Chavatanont, who are multiple team and individual medalists at the SEA Games, Asian Games and 2019 FEI Asian Championships.

Because she wanted to downsize and focus more on training, Roy Blue Stables was sold and Heek is now renting Gestut Weidenhof from the parents of the late Holger Munstermann, who died suddenly at the of December. She will be moving 20 horses, her own and clients', to the yard in Werl on 1 May 2020.

"I want to keep on going with my work but want to have less horses of my own. I had already stopped breeding (at Roy Blue Stables), even though that was one of the most amazing parts," Heek told Eurodressage. "I will now have much more time to train my students, teach more lesson and clinics and do some online training in the future."

"At Gestut Weidenhof there is eveything you need for good training," Kirsten explained. "And hopefully next year I`m able to compete in Grand prix again with one of my home bred horses."