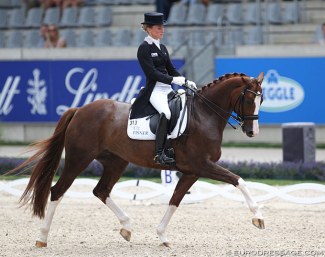 She is bred by Hans Brüning and owned by Carl Louis and Paul Ferry Ferdinand.

The chestnut mare began competing in 2014 under Rieke Schneider, who placed 9th with her at the Bundeschampionate in Warendorf that year. Schnieder showed her lightly in 2015 and in 2016 Katharina Koch took over the ride.

In the autumn of 2016 Brisbane made her debut under German Grand Prix team rider Helen Langehanenberg. They had their most successful season in 2017 when they qualified for the Nurnberger Burgpokal Finals for developing Prix St Georges Horses, and placed fifth in them. They also ranked second and third at the CDIO Aachen.

Brisbane disappeared from the show scene in 2018 but returned in May 2019 at the local show in Bielefeld at Intermediaire II level. At the end of the year Langehanenberg's assistant rider at the time, Nico Kapche, took over the mare and showed her in Ankum, Isterberg, Appelhulsen and Munster.

Helen Langehanenberg's student Shona Benner, who is preparing for her transition from ponies to junior level in 2012, has leased Brisbane.

Shona already has the 8-year old KWPN mare Dancing Florencia (by Don Tango B x Negro) as her future hope and now added Brisbane to her string.

"Brisbane was at Helen's place and she allowed me to ride her," Benner told Eurodressage. "Soon after we got together with the owner and decided to lease her."