Jane Bartram: "Stallion Owners Need to Take a Long Hard Look at Their Own Practices" 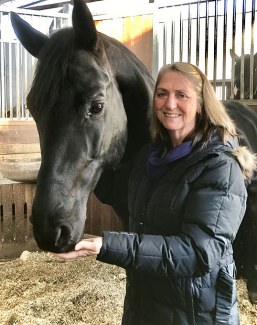 Guest columnist of this week is Jane Bartram, owner of Elite Frozen Foals in Australia. She has been importing frozen semen from Europe since 2005.  Together with her veterinarian husband they own Hollands Bend Warmbloods and have been breeding horses for over 40 years. Using their herd of 14 mares (mainly imported), they breed 8 to 12 foals each year.

I write in response to the Eurodressage article  Stallion Owners Demand WBFSH to Take Action Against Sperm Fraud which suggested that fifteen stallion owners from across Europe had sent a letter to the World Breeding Federation of Sport Horses in October 2019 to demand for measures against sperm fraud. I sit on both sides of the warmblood breeding fence, both as an Australasian importer and sales agent of frozen semen for 15 years and as a breeder, using frozen semen on approximately 12 mares each year.

In my opinion those stallion owners accusing the world’s warmblood breeders of sperm fraud need to take a long hard look at their own practices. I have observed significant changes over the last 15 years in the attitude to and quality of frozen semen sold to me by some German stallion owners.

I am at a loss to understand how new reproductive technologies have contributed to any sperm fraud. The technique of embryo transfer requires the use of the same amount of semen as any breeder would choose to use in a normal insemination cycle. In fact, we recommend to clients that, given the extra costs associated with ET, full doses should always be used in each cycle. Twinning with frozen semen in not overly common.

Stallion Owners Nervous about the advent of ICSI

Stallion owners seem nervous about the advent of the relatively new process of ICSI. This does allow the use of fractions of a dose of semen but has a success rate of no more than 12% of pregnancies for each ICSI cycle. I would estimate that perhaps 5 to 20 warmblood foals per year are currently being produced from ICSI worldwide (although my knowledge of what is happening in Europe is limited). I fail to understand how this is a threat to the stallion owners as they have made a profit from selling the semen and the world is not about to be flooded by ICSI progeny. Aside from semen costs, each ICSI foal has approximately $8 to10,000USD in vet costs and $3,000USD in recipient costs embedded.

The owners of stallions have an interest in two separate industries, chilled/fresh semen insemination and frozen semen sales. Within Europe, the majority of breedings are chilled-transported semen which is a non-durable product. The semen is shipped to the breeder on order and used for insemination of the mare on a single-use basis. The contract with the breeder is for the production of a pregnancy and normally, semen will continue to be supplied each cycle until a pregnancy is achieved.

Frozen Semen Sold as a Commodity

Frozen semen (TG) has been an evolving commodity over the past 15 to 25 years. It was seen as a by-product of the warmblood breeding industry which allowed breeders in North and South America, Australasia and Southern Africa access to European warmblood stallions. However, TG is also routinely offered to European breeders for popular in-demand stallions. The stallion owners now see the TG-samen trade as a valuable adjunct to their profit stream, in addition to the steady stream of chilled semen sales.

Frozen semen has usually been sold as a commodity, like a bag of rice. You buy your dose of semen and the rights you have attached to that dose are written in the contract you have with the agent of the stallion owner. These contracts seek to control or limit any positive outcome from a breeding, while offering breeders no relief for a negative outcome. Typically, these contracts have fallen into one of two groups: either you are entitled to one service certificate per insemination dose or you can use the semen as you choose and receive as many service certificates as you achieve pregnancies. However, these contracts do not speak to the rights of breeders who fail to achieve a result from their breeding. While, statistically, less than 50% of inseminations will achieve a pregnancy the stallion owner/s (in the main) offer no recompense to the unsuccessful mare owner. The stallion owner has taken their money and has no concern for the failure or success – I am rarely asked anything about this.

I have seen a steady decline in the compliance of the semen I am sold from European stallion stations with internationally accepted standards. I have been offered frozen semen, which I previously purchased at 8 straws per dose, then it was offered at 4 straws per dose and more recently at 2 straws a dose. When we look at the CASA results it is obvious the stallion owner is supplying less than an ideal insemination dose even if the semen is successful. There seems to be little respect among some of the more peripheral semen suppliers in Europe for the international standard of an acceptable dose of semen with respect to all of the necessary CASA parameters. The stallion owners seem driven by their frustration from reading of split-dose successes published on the internet and the obvious profit motive from reducing a semen dose from 8 straws to 4 or 2 or 1.

So where is the semen fraud?

So where is the semen fraud? In a system where all of the breed registries required the production of a “Deckschein” to prove that a foal presented for registration was the result of a breeding which the stallion owner had been paid for, the system worked really well. Here in Australia we have continued to try and control the production of service certificates to ensure the contractual conditions are complied with. However, many horse registries in the USA, New Zealand and other jurisdictions do not require a Deckschein/Service Certificate produced by the stallion owner or their agent. Meanwhile, in Australia, only approximately 60 to 70% of all warmblood foals are registered. The registration of warmblood foal is not mandatory and so it is not possible to control or manage foal numbers. As a consequence of this, it would be impossible for the WBFSH to govern things as suggested in the article.

So where does the problem lie?

So where does the problem lie? We have a product, frozen semen, with a shelf-life of at least 100 years. We are able to produce foals without any acknowledgement from the stallion owner that they have been reasonably paid for the service. I personally worry how I am going to produce service certificates for semen I sold this year when it is used in 40 years time. Frozen semen pregnancies will continue long past the end of the life of the stallion owners, but frozen semen failures are happening now and the mare owner remains uncompensated for either the semen cost or the ancillary veterinary costs. The per cycle conception rate with frozen semen in horses overall remains just below 50%, regardless of the techniques used. Historically, stallion owners have priced their frozen semen to allow for the failures and successes of the mare owners. We had a formula for pricing frozen semen in 2010 which was: Price/insemination dose = (Service fee + 100 euros)/3. This allowed for the successes and failures of the medium without allowing anyone to take advantage of the system.

I think the “Group of 15” are dreaming when they claim there is systematic semen fraud. Most breeders using frozen semen would suggest that any semen manipulation was purely an attempt to catch up. If the WBFSH could produce a standardised process for production and documentation of service certificates the rights of both stallion owners and breeders could be easily protected. While ever the WBFSH accepts members who do not require a Deckschein or service certificate for the registration of foals they will not be able to mandate anything.