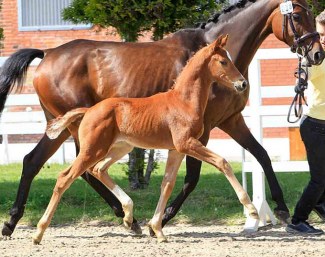 The chestnut colt Valentin became the top selling foal in the 2020 Hanoverian Online Dressage Foal Auction that concluded on 6 June 2020.

Around 60 bids were placed online for Valentin (by Vitalis x Fürstenball), bred and owned by Enrico Messelis. A customer from the USA had the longest breath and secured the colt for 52,000 euro. For the second time, breeder Enrico Messelis had reason to celebrate. Three years ago the full sister of Valentino's dam was one of the top foals at the Elite Foal Auction.

The second most expensive foal was colt My One (by Morricone x Bordeaux) which moves to Switzerland for 16,000 euro.

The Hanoverian Online Dressage Foal Collection, which ran from 3 to 6 June, featured a small collection of dressage foals but they were in great demand. 19 fillies and colts with first-class pedigrees were part of the auction lot. The average price for a foal in this auction was 10,289 euro.

"This is already the third Verden Online Auction within four weeks," said managing director Wilken Treu. "These regular events enable us to offer constant sales events under the current conditions to our breeders as well as to our existing and new customers".

Next Saturday the Verden Online Auctions will continue. From 10 - 13 June top-class show jumping foals will be the focus. Two weeks later – from 1 - 4 July - Hannover's top offspring are waiting for new owners for the fifth time. The next riding horses will be for sale on July 18. These talents can be personally inspected and tried out in the training and sales centre as of 7 July 2020.