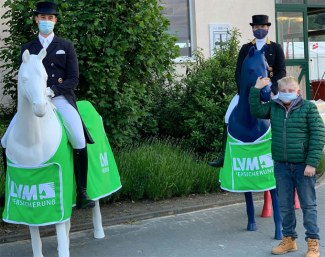 With exactly 77.567% Isabell Werth finished on Emilio (Ehrenpreis x Cacir AA) and Benjamin Werndl with Daily Mirror (Damon Hill x Florestan I) tied in the national  Grand Prix class, presented by LVM Versicherung, on the second day of competition at the national dressage show at Hof Kasselmann on 6 June 2020.

The CDN Grand Prix promised to be exciting: Dorothee Schneider, Fabienne Müller-Lütkemeier, Hubertus Schmidt, Emma Kanerva and Lena Waldmann and many more traveled to the Grand Prix in Hagen a.T.W. for their one of their first post-corona competitions.

In the end Werndl and Werth decided the competition among themselves and made it thrilling to the last minute. Third place went to Dorothee Schneider and DSP Sammy Davis jr. with 75.63%, followed by Fabienne Müller-Lütkemeier on the Florestano son Fabregaz, owned by Gina Capellmann-Lütkemeier, with 74.70%.

Sixth place went to the Westphalian mare Valencia As (by Vitalis out of a Hotline dam) with rider Fabienne Müller-Lütkemeier in the saddle.

"We are happy to be part of this tournament and to start the season together again," said Anna Blecker, responsible for the brand Covallerio in the house of the Albert Kerbl GmbH the start into the tournament season.

Denoix PCH On Form for the Louisdor Cup

Hubertus Schmidt has only just become a grandfather to little Kian, and it seems to have filled him with a lot of motivation for this weekend’s return to the competition arena. Schmidt took three horses to the dressage event at Hof Kasselmann in Hagen a.T.W., Escorial, Denoix PCH and Beryll.

With the latter two, he started in today’s qualifying round for the Louisdor Prize Final qualifier and immediately showed that he is ready to claim his ticket to Frankfurt. In the end, 77,500 percentage points were on the protocol for the riding master and the Oldenburger Denoix PCH (by Destano).  The atmosphere at the Borgberg venue seems to suit the eight-year-old chestnut stallion; last year the combination already won the Intermediare I at Horses & Dreams meets France. Denoix PCH is owned by American Nancy Gooding, a long-time sponsor of Schmidt, and shows great talent for the Grand Prix movements, particularly piaffe, passage and one tempi changes.

Second place went to Holga Finken and the 11-year-old KWPN gelding Gino, who scored 75,877 percent. Finken is located at Sudenhof in Hagen a.T.W. and had probably one of the shortest travel times to the event. Dr. Annabel Frenzen and her 9-year-old Rheinländer SilberStern, a horse she bred and trained herself and with whom she was already successful at the Bundeschampionate and Nürnberger Burg-Pokal Final, finished in third position.

The Louisdor Prize Final qualifier will be held on Sunday from 9:30 am, with the short Grand Prix test on the programme.