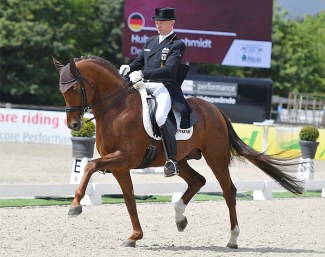 The Louisdor Cup missed its traditional kick off at the Horses & Dreams CDI Hagen in April due to the corona pandemic and had to be postponed. With the lockdown ended, Hof Kasselmann was eager to host the first big national dressage competition in Germany, post-corona, and did so on 5 - 7 June

From Celle to Colorado

Denoix is a 2012 born Oldenburg stallion by Destano out of Princess (by Pik Noir x Quattro B x Thannhaeuser).  He is bred by Friedrich Kuhlmann

He was licensed at the 2014 Oldenburg Stallion Licensing and acquired by the Celle State Stud at the auction for 70,000 euro. The chestnut got named "Denoix" after the famous French veterinarian and lameness expert, Dr. Jean-Marie Denoix. The stallion did his 30-day suitability test in Neustadt/Dosse and scored 8.09 for dressage and 7.04 for jumping to finish on a total of 7.96 points.

In 2016 he began his competition career under Celle state stud rider Janina Tietze as a 4-year old and was reserve champion at the 2016 Oldenburg Young Horse Championships in Rastede.

American Nancy Gooding, a long-time sponsor of Hubertus Schmidt and heir to the Pepsi cola dynasty, purchased Denoix at the 2016 Oldenburg Autumn Elite Auction for 300,000 euro.

Straight to Grand Prix at Fleyenhof

Initially In 2018 Schmidt's student and assistant rider Katharina Hammer competed Denoix at two local shows at M-level and won both.

While some horses get time to mature at small tour level before making the lead to Grand Prix, the gifted Denoix is moving straight up into the Louisdor Cup circuit at age 8.  "He was already good in the small tour, and now the piaffe, passage and one tempi changes came, which he does in a genius way," Schmidt told Dressursport Deutschland.

At the CDN Hagen last weekend, the judges were very eager to take seat in their boxes and hand out generous scores to all riders.

“It is of course much more fun to ride in front of a large audience, but we made the most of it here. The event was well organised and the conditions for the horses are always perfect. I am just glad that shows are under way again and hope that some other organisers will agree to run events too, ”said Hubertus Schmidt.