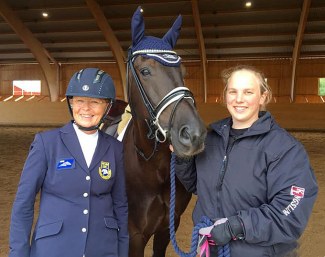 The pair competed in Grade IV.  In 2011 she was knocked on the floor by a horse and sustained a cracked skull and three cerebral haemorrhages. After the accident, she experienced impaired balance and impaired motor skills on her left side.

In July 2020 Qvarnström believed the time had come for the then 17-year old chestnut to retire from competition sport. The postponed Olympics came too late for the horse and Katarina did not want to risk the gelding's health on such a long journey.

"I'm terribly sad. Zernard has been better than ever and throughout his life and has gotten better and better, really. But we did not dare to risk his health with such a long journey," Louise tells Hippson.

Etzner was suddenly without a horse for Tokyo and her Olympic dreams were dashed.  Sofia Ridderstad came to the rescue, as she ended up buying Goldstrike BJ, a 10-year old Dutch warmblood by Dreamcatcher x Jazz, which Etzner found in Holland.

"My friend Helena Ager contacted a dressage judge she knows in Holland and asked for tips on horses that could fit for me," Etzner explained. "I had to describe exactly what I was looking for, and pretty quickly a tip came back. We got several movies and decided to go down and test drive "Goldie", as he is called. I also tried a couple of other horses, but he was the right one."

Ridderstad purchased Goldstrike BJ but put the horse in Louise's name, so she would never have to part from him.

"Sofia knows exactly how much horses and riding means to me. She wanted to help me invest and said 'I'm buying you a horse," Etzner explained adding that she is listed as the owner. 'So that I will never have to get rid of him. I couldn't believe that there are people who do such a thing for someone else. have Helena and Sofia to thank for this horse."

The partnership with Goldstrike BJ was too new for Louise to compete him at the 2020 Swedish Para Dressage Championships in Stromsholm in September.

Instead she rode to the gold medal and national title aboard her friend, Helene Ager's 14-year old Swedish bred Ramses (by Dionysos x Weltbürger) as a catch ride.