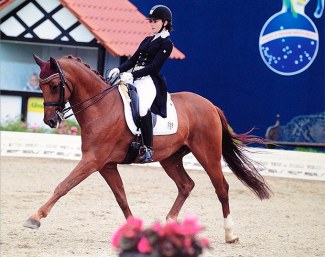 The Oldenburg licensed stallion Köpenick has passed away on Tuesday evening 13 April 2021. He was 20 years old.

Köpenick was by Krack C out of Wienerin (by Raphael x Weingraf). He was bred by Paul Schlipf.

Owned by Thomas Casper from Gestut Birkhof, the liver chestnut was first licensed in a special private licensing for Baden-Wurttemberg in June 2004. He was approved at the 2005 Oldenburg Stallion Licensing in Cechta.

He did his 30-day stallion performance test in Neustadt/Dosse, scoring 8.86 for dressage and 7.73 for show jumping to finish on a final total of 8.51 points.

As a breeding stallion he covered only a modest number of mares. He sired on licensed son (Sabina Schrodter's Kir Royal) and one state premium daughter. He has 87 offspring registered for sport with the German equestrian federation. Five of them are at S-level, his best known one is Köpenick’s Diamond (by Köpenick x Don Diamond).

Köpenick was first started by Nicole Casper. The Oldenburg stallion placed sixth at the 2006 Bundeschampionate in Warendorf.

The Waldsee based Paulina Rohr purchased the stallion at the end of September 2013. At the time she trained with German judge Dr. Dietrich Plewa.

The pair made its national show debut in October 2013 at M-level. In 2014 they moved up to small tour and qualified for the 2014 German Young Riders Championships in Zeiskam, where they unfortunately had to withdraw after the stallion knocked himself in the warm up. They were reserve regional champion that year.

They did not compete in 2015 but returned to the arena in 2016 and became regional champion of Rheinland Pfalz. They mainly rode at regional shows through 2017 and rode up to Inter I level. They did one competition in 2018, their last together, at the CDR Oberursel in March 2018.

"He spent his retirement at the riding club Walldorf," Rohr told Eurodressage. "Unfortunately he suffered from arthrosis and it became progressively worse. On Tuesday we had to decide to put him to sleep."