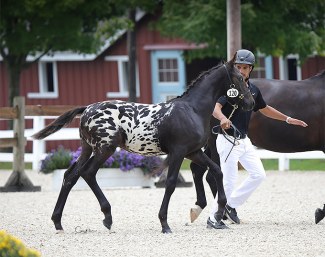 The offspring of the 5-year old U.S. bred Knabstrupper stallion Pax Asgard af Pegasus captured the attention of the crowds and judges and finished third in the "Get of Sire" class at the 2021 Devon Breed Show held at Dressage at Devon on 28 September - 3 October 2021.

U.S. Bred with a Pop of Colour

He was bred at Sanchez stables in Utah, where the Tucci couple discovered him in 2019.

"Pax has been producing lovely warmblood type offspring with long legs and well balanced frames," Renée Tucci told Eurodressage. "The Knabstrupper breed is from Denmark and prized for its incredibly amateur friendly temperament and their colourful leopard coat patterns."

Pax is homozygous LP and PATN1, which means he will only produce leopard or near leopard foals when bred to a solid mare. He has been approved for the Knabstrupperforeningen For Danmark (KNN) as well as Westfalen, and brings something different for the sport horse lover.

"There are a variety of approved outcrosses for the breed including a numerous Warmblood books, Thoroughbreds and Arabians. At Murder Hollow, we use top quality mares who are proven in sport to cross onto our stallions," explained Renée who manages Murder Hollow farm in Chester Country, PA.

Pax Babies In the Devon Spotlight

The Dressage at Devon breed show is the only prime sport horse breeding event in the U.S.A. where the traditional warmblood breeds compete next to and against coldbloods, Iberian horses, Arabians, Appaloosas, Morgan horses and ponies.

The leopard coloured babies certainly caught the spotlight in Devon, where the traditional dressage crowd is more used to the monotone coats of chestnut, bay and black.

Murder Hollow Farm matches their Knabstrupper stallion to proven dressage bred mares in order to produce something different for the sport with outstanding rideability.

Oleander's dam Cinderella is a KWPN Elite and Sport predicate Grand Prix mare (by Florencio x Havel), while Revelation is out of Segnorita, is a Hanoverian dressage mare by Scuderia. Juxtaposition is out of Jakira (by Johnson), one of Murder Hollow Farm's actively competing mares in both four-in-hand driving as well as dressage. Jakira is a Premium mare who also competed in the Produce of Dam class in Devon, placing third with two foals from 2021 and second in the Mare class.

Renée's love for spots is not only apparent in the horses she breeds, she also has  four Dalmatians at home and the black and white cat to keep her pets colour co-ordinated.

The entire white coated Pax is more the exception to the colour palette, although his leopard babies leave nothing to the imagination.

Pax' versatility and stunning temperament is proven by the fact that the stallion easily switches between dressage, being driven in harness and or take up skijoring.

"Pax is driven in harness as well as ridden in classical dressage training," Renée explained. "He has produced a number of exceptional offspring and we are excited to have the breed represented at Devon. To place third against highly competitive warmblood stallions is an honor."