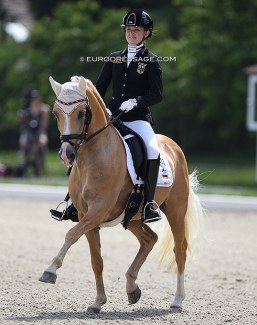 The medal winning German dressage team pony Cyrill has a new rider in Viktoria von Braunmühl. His previous pilot, Jona-Emily Bomberg, reached the age limit and has moved on to horses.

Under the owner's daughter Nadine Krause he represented Germany at the 2015 European Pony Championships where they won double individual silver.

In 2016 Inga Katharina Schuster took him to the European Pony Championships in Vilhelmsborg and got silver in the individual test, but retired in the Kur.

Jana Lang rode him from 2017 through 2018 and represented Germany at the 2017 and 2018 European Pony Championships, winning team gold and two times individual test bronze.

In 2018 the stallion was allocated to Melina Thelemann, but never went to a CDI. Instead she showed the pony at nationals shows from 2018 till July 2020.

In 2021 it was Jona-Emily Bomberg's turn who successfully rode him at CDI's in Sint-Truiden, Hagen, Kronberg, Zandhoven and Ornago but did not clinch selection of a very competitive team spot.

Cyrill has now moved on to his sixth rider who aims to compete him at international FEI pony level, Viktoria von Braunmühl.

The 13-year old Von Braunmühl is based in Münsing, Bavaria, and her sisters Sophie (15) and Maya (11) are also passionate riders. Sophie and Viktoria do dressage, Maya prefers jumping.

Viktoria made her show debut at E-level in 2018 on Paulina von Wulffen's former pony Wishing Well (by Werwolf x Comeback). In 2019 pony Hugo B (by Hemmingway B x Dornik B) and Diamante Grezzo B (by Dornier B x Gershwin) joined the ranks and she rode him to a 7th place in the consolation finals at the 2020 Bundeschampionate. In 2020 she also took over the reins on Dodo and those three ponies she has been actively competing in 2021.

By adding Cyrill to her string, Von Braunmühl has a strong iron in the fire to open the door towards international pony dressage competition and German team selection events, such as the Preis der Besten.  Both Viktoria and Sophie are training with Anna Christina Abbelen and moved to Bonn to be with their coach.