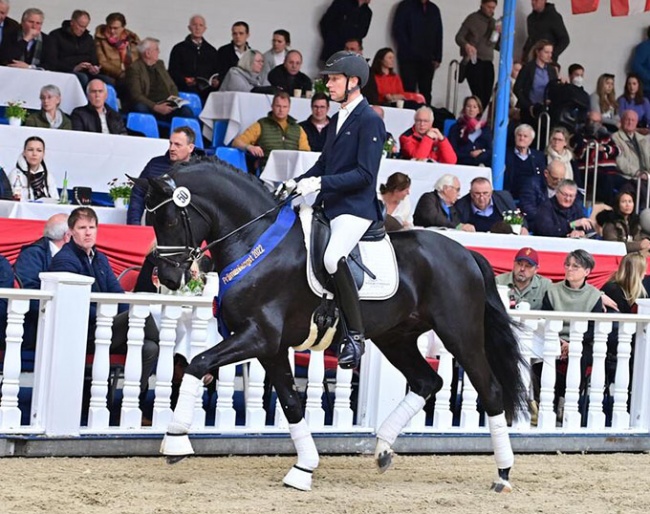 The 96 edition of the Oldenburg elite auction coincided with the 11th Oldenburg saddle licensing and newly licensed and non-licensed colts complemented the auction collection.

The third ranked premium stallion of the saddle licensing, Scotland Yard, became the best seller of the auction. The black stallion (by Secret out of Elfenwald by Fürst Romancier - De Niro - Rohdiamant) sold for 280,000 euro to a German Grand Prix rider from Bavaria. Bred by Wilfried Fleming and owned by the Vienna based Austrian company Tai Trading Agency GmbH, Austria, he was discovered at the Elite Foal Auction in Vechta and presented under saddle by David Taylor.

The same Bavarian Grand Prix rider bought the second most expensive horse of the auction, the 3-year old Secret's Hit (by Secret out of Weisssilber by Sandro Hit - Rubinstein I - Inselfürst). She paid 165,000 euro for this colt, who is bred by Marco Trier and was owned by Hans Henning Grönwoldt.

The Champion Stallion of the Oldenburg Saddle Licensing, the 3-year old Krokant (by Kremlin MD out of Bella Blue by Bvlgari - Samarant - Weltmeyer), bred by Wilhelm Klausing moves to Denmark. The online bidding platform posted a sales price of for 160,000 euro.

The 3-year old Tip Top (by Toto Jr. out of Fabiola by Benicio - San Amour I), bred by Dr. Lioba Schreckenberg, was the most expensive riding horse in the auction. He fetched 146,000 euro and moves to the USA.

The most expensive jumper was the 6-year old Kannan's Girl (by Kannan x Cassini II), who sold for 37,000 euro to Sweden.

The interest of international customers in Oldenburg elite horses was again overwhelming. More than half of the collection was sold to Oldenburg friends around the globe. Customers from the USA (7), Sweden (4), Switzerland (3), Costa Rica (1), Denmark (1), France (1), Great Britain (1), Colombia (1) and Mexico (1) will be riding talented Oldenburg horses in the future.