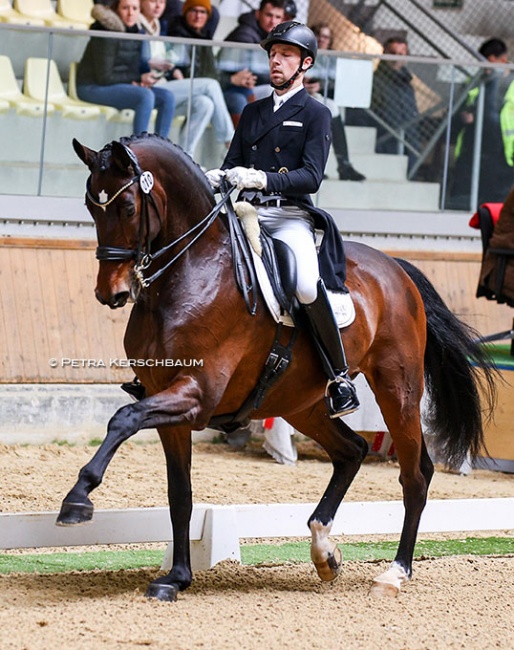 German based Canadian Ryan Torkkeli of Thunder Bay, ON, won the Grand Prix Special on the final day of international dressage competition held at CDI4* Stadl-Paura, Austria, on 14 - 17 April 2022.

Riding Sternenwanderer, a 15-year-old bay Rheinlander gelding (Lord Loxley I x Ragazzo) owned by Ingetraud Bolz and Dieter Laugks, Torkkeli contested the CDI4* Grand Prix on Saturday, April 16, and received a score of 70.825% to place fourth among the starting field of 16 entries. The score was a personal best in the Grand Prix test for Torkkeli and Sternenwanderer, the horse he has been showing at the Fédération Equestre Internationale (FEI) level since May of last year.

“I knew right away when I started trotting that he was really with me, motivated and energetic,” said Torkkeli. “From the first trot steps I knew that it was our day. We had really nice test. He has such huge movement that I have to work on making him move smaller, keeping it small and tidy, because he’s so extravagant. It worked for the most part.”

On Sunday, the pair returned for the CDI4* Grand Prix Special where they were awarded the winning score of 71.426% and took home the lion’s share of the €12,000 in prize money on offer.

“He was super focused even though there was a lot of atmosphere and a lot of people watching,” said Torkkeli of his winning ride. “We haven’t competed very much with spectators due to Covid, and I’m learning that he loves it when there’s people watching. He never gets tense; he is a real showman. He loves the prize giving and the atmosphere when there’s a lot of people and it’s a little bit electric.”

“That’s definitely the goal,” said Torkkeli, 40, of representing Canada at the 2022 World Championships. “It’s what I’ve been working for my whole career. I came to Germany over 20 years ago as a 19-year-old and all you think about is going to the Olympics or World Championships or World Cup Final. You ride a lot of horses and have a lot of opportunities, but there are a lot of factors that have to come together for it all to work. I have an amazing horse, an amazing trainer, and an amazing owner, and it’s a life goal and everything I’ve worked towards.”

Torkkeli was first introduced to riding while growing up in Thunder Bay, ON, and has followed the path with horses to Germany, the United States, and back to Germany.

“It was very much by chance, a series of events, that led me to Germany,” explained Torkkeli of his unlikely journey to the top level of dressage sport. “I started riding in Thunder Bay when I was a teenager, and someone said if you want to learn to ride properly, you have to go to Germany, they have the best system. I took that to heart and cold-called and wrote a lot of emails in 2000 and Catherine Haddad Staller was the only person who replied. I got a working position with her in 2001.”

After moving to Germany to work with Haddad-Staller, who has twice represented the United States at World Cup Finals, Torkkeli’s path eventually led him to California where he and his American husband, fellow grand prix competitor Thomas Walker, based their training business for six years.

“When Ingetraud Bolz, the woman who owns Sternenwanderer, asked me if would come work for her, it was a no-brainer. I’ve known her for nearly 20 years, and she’s an amazing human being,” said Torkkeli of his move back to Germany three years ago in January of 2019. He and Walker both work at Bolz’s training center outside of Cologne, a 10-minute drive from their home in Königsdorf.

In another twist of fate, Torkkeli has known Sternenwanderer since the horse was three years old. His trainer since 2005, Dieter Laugks of Germany, trained the horse before Torkkeli took over the ride three years ago. The pair are now on their path to the World Championships, with their next competition scheduled for CDI Le Mans, France, from April 28 to May 1, 2022.

“I’m so happy that it’s coming together, and excited for the upcoming shows,” said Torkkeli. “I’m a smalltown kid from Thunder Bay, and I still feel like a 19-year-old working student in a lot of ways. When I started riding, it was with amazing people, and I learned to enjoy horses and that set the groundwork. When they’re playing the national anthem for you in Austria, it’s hard to hold back the tears.”