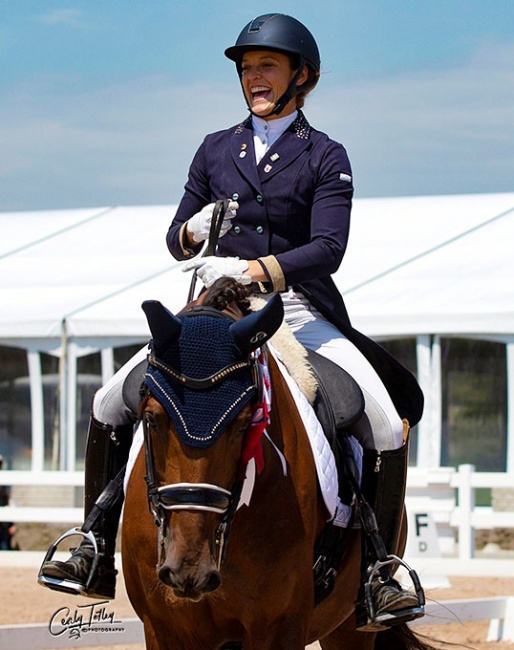 After missing the last two years due to COVID-19, the Ottawa Dressage Festival (ODF) was thrilled to welcome back over 200 competitors and 500 spectators to four days of high-level competition from May 19-22, 2022.

Even with the Ottawa area witnessing devastating storms on Saturday, the event organizers from National Capital Dressage Inc. were still able to host a highly successful competition with some scheduling changes for the Sunday’s ride times. Organized by volunteers since 2003 and held at the prestigious Wesley Clover Parks, the event saw several athlete and horse combinations achieve scores to be considered for the upcoming Fédération Equestre Internationale (FEI) World Championships in Herning, Denmark in August.

Equestrian Canada (EC) staff members were on hand to take in the incredible competition and engage with attendees at a hosted booth where EC merch was available. Shirts, hats and vests were sold throughout the weekend with proceeds going to support the Canadian Equestrian Team’s equipment needs for Worlds later this summer.

Mathilde Blais Tetreault and Fedor (Johnson TN x Negro), a 12-year-old Dutch Warmblood gelding, owned by Laurence Blais Tetreault, earned the win in the Grand Prix on Friday, scoring a 68.609%. The Montreal, QC, native continued her success over the weekend earning a personal best score of 72.420% in the CDI 3* Grand Prix Freestyle to music.

“Fedor and I never travelled on such a long distance for competition, I am happy with his behaviour, he came in great shape for the show” said Blais Tetreault. “He is getting more confident and mature at this level, I’m extremely happy."

Tina Irwin of Stouffville, ON, and Fancy That (Donnerschweg x Frelherr), a 17-year-old Oldenburg mare owned by James Irwin, began the weekend with a 67.239% in the CDI 3* Grand Prix. The pair came back on Sunday and won the CDI 3* Freestyle to music with a personal best score of 73.220%.

Jody Schloss of Toronto, ON, earned wins in all three tests of the Grade I in the CPEDI 3* Para-Dressage competition. The two-time Paralympian began her weekend scoring 70.536%, while riding her own Lieutenant Lobin (Lobster x Fanal Prydsholm), an 18-year-old Danish Warmblood gelding. On the second day, the pair improved their score in the Individual test with a 71.345% and concluded the weekend with a personal best 74.478% in the Freestyle.

“Lobin was a definite super star, even during the storm, he preserved and did his best” said Schloss. “After the storm, he was raring to go, he seems to know his job and when we are in the ring, he is in ‘show mode’, we scored a personal best!”

In the Grade IV division, Laura Hall of Ladysmith, BC, earned a personal best in the Team test, scoring a 70.000%, while riding Istrano (Chironie x Waldemar), she co-owns with Andrew Hall, a nine-year-old Dutch Harness. On the second day, the duo earned a 70.041% in the Individual test and 69.142% in the Freestyle to wrap-up the weekend.