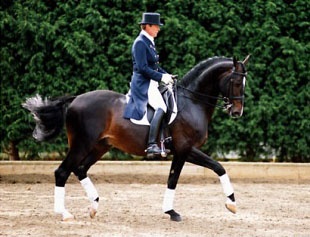 Training at a renowned dressage trainer in Europe, is not only good for getting educated, but also for business. American rising star Leslie Morse, who dazzled her country's audience by winning the USET Intermediaire I Championships in 2001 aboard Kingston, was offered a grant to train with Kyra Kyrklund in Europe. Her stay over there was so fruitful, that Morse decided to leave Kingston in training with Kyrklund in England. Now Morse will bring along Tip Top in competition in the United States.

Tip Top has been purchased by D.B. Enterprises and will be available for breeding duties and then continue his show career with two-time USET Festival of Champions winner Leslie Morse. Tip Top received an eight on his walk, a nine on his trot, and a ten on his canter at his Swedish stallion inspections.