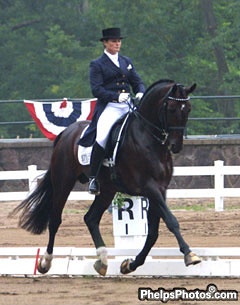 at the Bayer/USET Festival of Champions held at the United States Olympic Training Center in Gladstone, NJ.

Earning the blue ribbon in the Grand Prix and the Grand Prix Freestyle and taking second place honors in the Grand Prix Special, Morse finished the weekend with an overall score of 68.711%, but this in the absence of the American A-team riders, who were competing at the prestigious CDIO Aachen. “He’s going really well. I’m really excited. It’s only his fourth year in dressage,” Morse said of her stallion.

Morse imported her stallion, who stands at 17.3 hands, from Holland after finding him at a sales barn. “He gives a feeling that he will just protect you and take you. He touches me,” she said of her partner.

Finishing behind Morse and earning Reserve Champion honors was Jan Brons aboard Fernando. Brons and Fernando finished the weekend with an overall score of 66.472%. Although he has been living in the United States since the 1980s and currently resides in Southampton, NY, the Bayer/USET Festival of Champions, marked the first time that this native of Holland has competed as a United States citizen, so this win was especially meaningful.

Earning third place honors was Susan Dutta of Wellington, FL, aboard Gumshoes DC. This horse-and-rider combination finished the weekend just behind Brons with an overall score of 66.355%. An ex-jumper, Gumshoes DC, has a special place in Dutta’s heart. “He’s the love of my life, that horse,” she said. “This horse owes us nothing. Everything he does for us is extra. He brings us only joy.”

Related Link
Full Coverage of the Festival of Champions at Horsesdaily.com