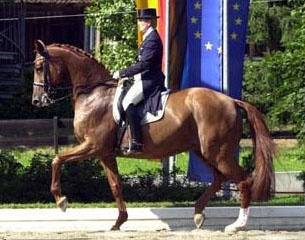 Petra Epping's beautiful Grand Prix horse Giselle has unfortunately passed away at the end of December in 2003. The Hanoverian mare had to be put down because of an incurable broken leg.

During the Westfalian Regional Championships in the summer of 2003, the chestnut Giselle tripped over a stone during the warm up and broke her leg. She was immediately transported to the veterinary clinicn where the mare's leg was put in a cast. She had to rest for four months.

In December 2003 Giselle's leg had healed and she started doing some light flatwork again under Epping. However at the end of the month Epping's groom found Giselle lying in the stable unable to get up. The vet diagnosed that her leg was broken again and this time unfixable. Epping had her mare humanly put down that day. Giselle was only 12-years old.

With a sharp eye to detact talent in a youngster, Epping purchased the chestnut Giselle (by Grand Galopin x Weltenbummler) at the Verden auction for an unbelievable 8,000 euro. Epping trained the chestnut mare to Grand Prix level and was successful with her at various national and international competitions.

In 2002, Epping ranked seventh at the German Dressage Championships in Mannheim, Germany. The combination finished fifth in the 2002 Riders' Tour Finals in Munich, winning a purse of 25,000 euro. Because of her strong 2002 competition year, Epping was submitted to the German B-team with Giselle. 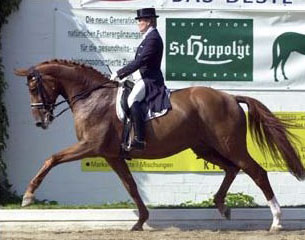 In 2003, Epping and Giselle continued their excellent performances by placing fourth in the Special at the CDI Balve and by ranking at the top at competitions in Hannover, Stuttgart, and Hamburg.