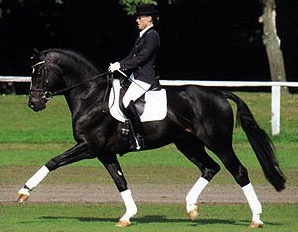 The black Hanoverian stallion Harvard has been sold to David Burke of Pangaea Farms in Canada. Burke purchased Harvard because of the stallion's personal top record and his offspring's success.

Harvard is an 8-year old Hanoverian by Hohenstein out of Carina (Cardinal xx x Ortelsburg).

"His type is modern with good, correct gaits," Burke explained. "He's very talented for dressage. He produces very high quality foals with very good conformation. Harvard won many conformation classes himself.  He already produced two licensed stallions.  And one going for the approval next week in Oldenburg.  Harvard scored a perfect 10 for temperament with a 9 in character, willingness and ability to work, constitution, and rideability. Harvard only produces dark coats on his progeny, and if all that was not enough, he has a surperb pedigree which we really need here in North America and one of his foals has been United States Dressage Federation (USDF) horse of the year in 2003 and 2004."

Until now, Harvard has been standing up for stud at Hengsthaltung Kathmann in Germany. He was the reserve champion of the Oldenburg Premierung in 2000. Harvard competed at the Bundeschampionate and is trained to Fourth level. One of his licensed offspring is Helly Hansen, who was licensed and sold to Sweden as a dressage stallion.

Harvard is licensed for the German Oldenburg, Hanoverian, Hessian, Rheinland, Baden Wurttemberger, Westfalian, and Bavarian Verband as well as the American Hanoverian Verband. "I feel that Harvard will be a great addition to anyone's breeding program if they are breeding Dressage or Hunters.  Harvard is not a jumper stallion," Burke explained.

Related Links
Hohenstein, Stallion of the Year 2002
Donatelli Sold to the United States