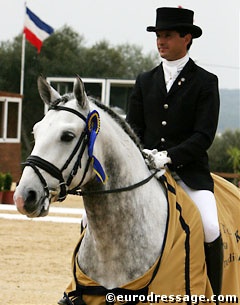 The Portuguese might have shown a glimpse of their rising potential at Grand Prix level, but the FEI Young Horse classes were an easy prey for them. Portuguese Jeanette Jenny and Miguel Ralao Duarte wielded the axe of power

in the 5 and 6-year old FEI Young Horse tests and were undefeated the entire weekend.

In the 5-year old class, Miguel Ralao Duarte saddled the sympathetic Lusitano stallion Talisco (by Xaquiro out of Noz), who is owned by Pedro Ferraz de Costa. The gray stallion could have shown more opening of the frame in the extensions, but overall he reflected an image of harmony and fluency.

Judge Christoph Hess was full of praise for this combination. "This is how we want to see young horses go in these classes," said Hess. "The rider has a wonderful position in the saddle, with very good hands. Talisco may not be the best horse in the competition, but he was the best ridden horse today."

Talisco showed a lovely rhythm in the trot and was always in front of the rider. His walk had good overtrack and the canter had a clear 3-beat rhythm. "This horse is 100% trained in the right way," Hess concluded. Talisco and Duarte won the 5-year old YH Finals with 73.00 points. Daniel Zapatero and Farrallon (by Campeon IX out of Grata II) ranked second, followed by Jose Carlos Castillo Munoz on the Westfalian RMS Arundensis. 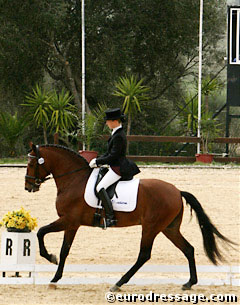 The competition in the 6-year old Young Horse class was of a higher level with more world class youngsters surfacing at the top of the ranking. Winner of the 6-year olds was Spartacus, a bay Lusitano stallion (by Xaquiro out of Juno) owned by Luis Pidwell. Portuguese Jeanette Jenny pushed Spartacus to brilliance showing a superbly suspended trot and the horse swung in all three basic gaits.

"This is a dream of a horse," Hess commented. "He has three truly good gaits with the right cadence and a very uphill canter." Jenny had some problems with the flying changes and the half pass to the left was not as supple as the one to the right, but overall Spartacus is such a talented horse that we would like to see him back at the 2005 World Young Horse Championships in Verden this summer. Jenny scored 82.20 points. 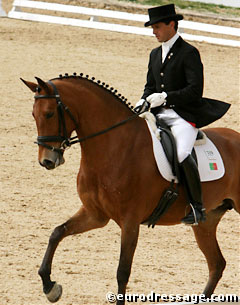 Placing second in the 6-year old finals was Miguel Ralao Duarte on the delightful bay Lusitano mare Sigonha (by Esquivo out of Doris). Again, Duarte presented his horse with absolute harmony and relaxation. The mare was smooth and fluent in all three basic gaits. "A real happy horse," Hess said, "that's the way they should be schooled." Especially the half passes were a highlight in the test. Sigonha scored 75.20.

Nuria Vila Perez and the KWPN gelding Silvius (by Mondriaan out of Juliabante) ranked third. The impressive bay stallion is very bold horse with good potential to swing in the trot. His walk showed decent overtrack, but the walk pirouette and especially the flying changes were the problems in Perez' test, which forced the score down to 73.60 points. 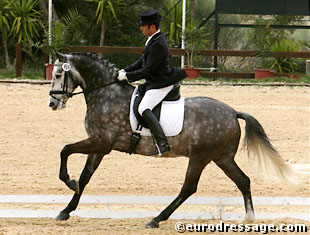 Worth mentioning is number four on the score board, Sinphonie, a gray KWPN gelding by Krack C. Spanish Lucas Elias rushed Sinphonie through the trot tour causing the horse to lose his rhythm, balance and self carriage, but in canter this Dutch warmblood was breath taking.

"It must be a dream to ride this horse in canter," Hess confessed. Sinphonie is so uphill and so ground covering that his canter work reminds you of Florencio's.

At the end of the young horse classes, Mariette Withages wanted to stress the fact that the relaxed, light and harmonious way the Portuguese winning riders Jenny and Duarte have presented their youngsters is an example for all other European riders. "They should all ride like this. That's what we want to see in young horse test," Withages said.

Back to the 2005 Sunshine Tour index