Satchmo Worth the Wait! 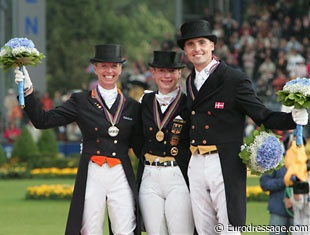 The stupid new medal system that the FEI instated last year was 'active' for the first time at the 2006 World Equestrian Games. No more overall champion who has to prove his valour and skill in three tests

, in which both the horse and riders' technical quality is tested as well as their artistic skills. No, now it's just the plain lucky guy of the day who is heralded as the champion. That rider who wins the Grand Prix Special gets a medal, and the one who wins the Kur gets a medal too. "It's better for the sponsors and the media," the FEI stated. Yeah right, but the concept of "Championship" is now totally undermined.....

...Anyway, the new Grand Prix Special World Champion (or however you want to name the champion) is Isabell Werth, Anky van Grunsven is the silver medallist and Andreas Helgstrand won bronze.

Werth scored the highest with a 79.480%. The extensions in trot and canter were fabulous as well as the trot half passes. The piaffe was very rhythmical and especially the piaffe-passage tour on the serpentine line was beautiful. At one time it looked like Satchmo would not make a smooth transition from piaffe to passage, but Isabell managed to control it. Satchmo's passage could be more collected and bouncing of the ground if you compare it to Salinero's, but Werth's bay Hanoverian is more relaxed in his work. 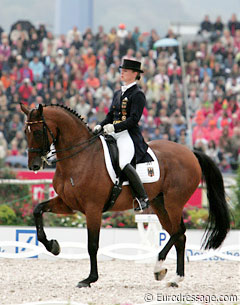 Satchmo is renowned for either being genius or mad and Isabell had to rely on Warum Nicht FRH as her first Grand Prix horse instead of the more talented Satchmo. "It seems like fate that I rode Satchmo here and won," Werth continued. "I know this horse has high potential, it's the best horse I've ever ridden. His career is quite strange. We started out very well and then had one year of big problems. We couldn't find the problem but then found the solution and now his confidence is back. I felt it one month ago."

In the press conference, Werth did not mention what this "problem" was that has been solved, but in magazine St. Georg she confided what really went wrong. Veterinarians check the horse inside out and found the problem in the autumn on 2005. Satchmo suffered from "floating membranes" on his eyes, which hazed his sight uncontrollably. An operation followed and was successful. Satchmo's sight is fully restored and now slowly has to regain his confidence in his rider and in the show ring.

Werth was ecstatic with her victory and cried throughout the prize giving ceremony. "I can't find the right words. It's unbelievable that Satchmo had his best test here in this atmosphere," Werth said during the press conference. "It really is a victory for my heart. In the Grand Prix I was able to show all the people that he's there when we need him. Today I rode for myself. I gave all what I had to give and won a medal." 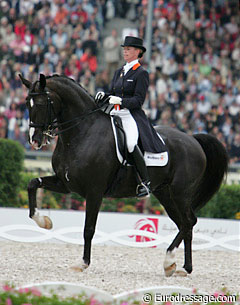 Anky's Grand Prix Special ride was typical for her. After a less successful Grand Prix, Van Grunsven was fueled to excel more and push her own limits. The Special was considerably better and her score of course higher. With 77.800% she won the silver medal.

However, her test was still filled with some classical Salinero errors: two non-halts, croup high flying changes (especially the first one of the single tempi's), and uneven passage steps (more engagement on the left hind leg than the right hind) or a passage that is not enough forward. These mistakes were mixed with some delightful moments that pushed the score up: brilliant half passes, gorgeous piaffes, super extended trots and a walk that was remarkably good with two hooves overtrack. 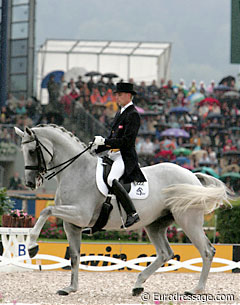 The bronze GP Special medallist was the Grand Prix winner Andreas Helgstrand aboard Blue Hors Matine (by Silver Moon). Several small mistakes kept them from silver or gold. There were two rhythmical errors in the first extended trot and Matine broke into canter in the third extended trot. Matine need to gain more balance in the collected trot as she seems to find it difficult to find a steady, balanced rhythm. The 9-year old mare is very green at Grand Prix level and that shows in her piaffe in which she opens the front leg to improve her balance. Nevertheless is her piaffe and especially passage the most elevated, engaged and breath taking of all horses competing at the World Equestrian Games. Those who think Elvis can passage, have not yet seen Matine move! The pair scored 76.560% and won bronze.

"We were so close to getting in," Lisa Wilcox said about Steffen Peters' Grand Prix Special performance. The American duo placed fourth and just missed a medal. Aboard Floriano (by Florestan) Peters scored 75.200%.

The highlights in their ride were the superb extended walk, the trot extensions and the half passes. The two tempi's were good, the ones needed to be more straight in the body. Floriano has a lovely passage but misses some bounce in the piaffe, making the transitions from piaffe to passage a bit less fluent.

It would be very interesting if Peters can improve even more in the Kur and be a challenger for a medal in the kur to music.

The 2006 World Equestrian Games were supposed to be Nadine Capellmann's medal reaping show. Hosted in her home town Aachen and riding one of the most talented horses in the world, Capellmann was unable to fulfil the expectations. 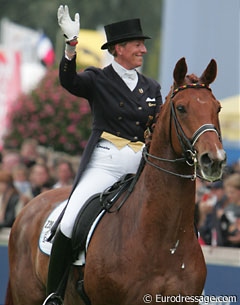 In the Special the pair missed fluency and smoothness in the movements. The piaffe, which is Elvis' weakest movement, did not bloom and Capellmann struggled to ride decent transitions to and from passage. There was some loss of rhythm in the first trot extension. They scored 74.760% and placed fifth. Maybe there is more in the tank for the kur?!

From a second place in the Grand Prix to a seventh in the Grand Prix Special. Kemmer was absolutely going for a medal, but she could not handle the pressure. In the second extended trot, Bonaparte almost took of in trot. He tripped during the one tempi's on the center line and fell out of canter before the pirouette left. In the single tempi changes, one change he jumped together behind.. these were all small mistakes that wouldn't make a winner out of them. The trot and canter extensions were super though, but 73.200% was far away from a medal earning score. Pity.

The absolute head turner of the 2006 World Equestrian Games is the Mexican Bernadette Pujals with her Hanoverian stallion Vincent (by Weltmeyer). At her first Games with her only Grand Prix horse, Pujals qualified for the Kur with scores over 70%. In the Special she excelled in her trot extensions and brilliant, ground covering tempi changes. The connection with the bit could be more steady.

Pujals hardly made it to the Games. Pujals got stuck in a nasty divorce case and her ex-husband took Vincent away early June for him to be sold in Germany, at the same time when Berna planned to start her WEG preparations. Offering up the house and farm she built up herself in Mexico City to her ex-husband, Berna acquired Vincent completely for herself only two weeks before the Games started. "I've had to give up everything for him," Pujals said. With the help of her trainer Jonny Hilberath, she was able to get Vincent ready for Aachen and now she has definitely risen to the occasion. Pujals will ride her very first freestyle with Vincent on Saturday evening under floodlights in the main Aachen ring.