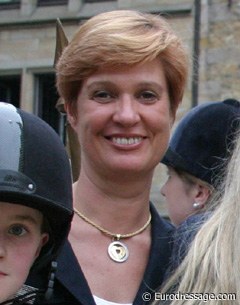 She organized a very special medieval costume birthday party and the glitterati of the dressage world was invited. We absolutely loved this photo of two of her guests, Uwe Heckmann and Thomas Rhinow of the Oldenburg Verband in Germany.

The Australian Horse Magazine reported that Australian Grand Prix rider Kristy Oatley-Nist is expecting her second baby. Oatley was at the Australian Dressage Championships to coach her student Nadia Coghlan and was showing off the beginnings of a pregnant belly. Father to the baby is Oatley's partner Piotr Staczek, a German professional soccer player, who playes for the Bargteheide football club. The couple already have one child together, Oskar, who was born in February 2005.

We were a bit sad to hear that not one Australian Young Rider is travelling to the FEI Young Riders World Cup in Frankfurt, despite having received a free plane ticket for the show from organizer Ann Kathrin Linsenhoff. At the Australian Dressage Championships, the EFA organized one qualifier. The top placing rider would be selected to go to Frankfurt. The winner of the class was Alycia Targa on Neversfelde Kudu. The owner of Kudu decided to breed the mare this (Australian) summer so Kudu would be unavailable for competition in December. The second placed rider (Alyssa Webb - UQC Galahad) did not achieve a high enough score to qualify for Frankfurt.

More Australian news. At the 2006 Annual General Meeting held 17 November 2006 in Melbourne, Chairman and EFA President Russ Withers completed his term and retired. Two other Directors, Mary Seefried and Kerry Brydon, also completed their first term but had nominated for election, together with two other candidates. Shareholders (Branches) then voted to fill the three vacancies. Mary Seefried, Kerry Brydon and former WA Branch Chairman Peter Hickson were elected. At a meeting of the "new Board" held following the AGM, Directors elected Geoff Sinclair to become the Chairman and President of the EFA.

U.S. photographer Mary Phelps and her husband JJ Hathaway have added a third dog to her Corgi collection. Besides grandma Gizmo and the young rambunctious Trooper, they have now welcomed corgi puppy Tasha to their family.

Danish News now: WEG Star mare Blue Hors Matine will return to the show ring after her medal winning conquest at the World Equestrian Games. The Danish warmblood mare can be seen in action at the CDI-W Stockholm next week. It will be a clash of the titans there as Andreas Helgstrand and Matine are to compete against local favourites Jan Brink and Bjorsells Briar.

The Danish Equestrian Federation also published that Lone Jorgensen's Hardthof's Ludewig G is up for sale. It was the plan to sell the Oldenburg gelding by Lagoheidor after the World Equestrian Games, but a mediocre performance there postponed the decision to sell the horse. Jorgensen and Ludewig competed in a few World Cup Qualifiers this autumn, in which the pair did well, winning the qualifier in Kaposvar, Hungary, for instance. Now the horse is officially for sale. Jorgensen still has her grey FEI horse Disco Hit and will be preparing another 6-year old for the small tour.

Edward Gal should not really be crying over the sale of the Dutch warmblood stallion Lingh to Karin Offield. Though he will miss his top horse, Edward recently got a phenomenal star in training which could be his new ticket to international stardom. Gal is currently training the Dutch warmblood Moorlands Totilas, the black Gribaldi offspring who finished fourth at the 2005 World Young Horse Championships and who was probably one of the best horses competing in Verden at that time. Can't wait to see that pair in the show ring.

A new young horse for Gonnelien Rothenberger. The former Dutch Grand Prix team member will be training the 3-year old Oldenburg stallion Florinero, a by Furst Heinrich x A Jungle Prince. The black stallion did his stallion performance test in Neustadt/Dosse and finished 8th. The stallion was purchased by the Rothenberger family as a foal.

The Oldenburg magazine Pferdeforum reported that Kristina Sprehe's Young Riders horse Rose Noir has been sold. The black Oldenburg mare Rose Noir is by Royal Angelo I x Welt As. Under Julia Katharina von Platen, the mare won the bronze medal at the 2003 World Championships for Young Dressage Horses. Afterwards she was ridden by owner Kristina Sprehe, who took her to team gold and individual bronze at the 2006 European Young Riders Championships. The name of the new owner was not listed in Pferdeforum.