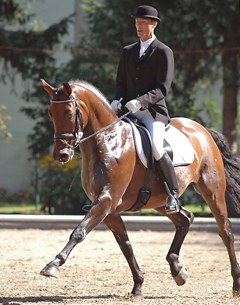 The bay gelding was brought to her attention by her trainer Holger Schmezer after the 2006 Bundeschampionate.

Under Mohr, Lancelott placed third in the 6-year old finals at the 2006 Bundeschampionate in Warendorf. In the Finals, Mohr totaled 8.54 points on Lancelott recieving 9.5 for trot, 8.5 for canter and 7.2 for walk.

"He's exactly what he appeared to be at the Bundeschampionate. Not only is he a spectacular trott, but he is also very easy going and a joy to ride," Capellmann confirmed.

Lancelott is by Lord Sinclair out of Loredana (Larome x Ehrensold) and is bred by Horse Center Antwerp in Massenhoven, Belgium. He's a full brother to Lafeyette Lord, a former Belgian 4-year old Young Horse Champion who is currently being competed at Prix St Georges level by Ingrid Klimke.

Capellmann is looking forward to competing him at Prix St. Georges level some time in 2007.