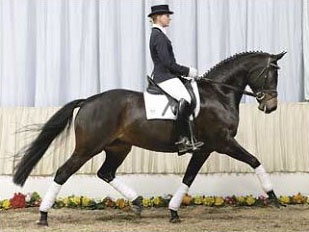 The licensed Contendro-son Carlucci, bred by Joachim Beckmann from Freiburg, was the price highlight of the 2007 Verden Spring Elite Auction of Hanoverian Sport Horses. The show jumping prospect was exhibited by the Fohlenhof from Hofheim-Wallau in Hessen and purchased by the Sprehe Stud Farm for 280,000 euro.

75 of the 76 offered Hanoverian riding horses were sold at an average auction sales price of 33,526.66 euro. Almost 50% of them will be exported. Seven horses will find their new homes in the United States and in Spain.

The 49 foals were also sold at top prices. The average auction sales price for a foal was 8,734.69 euro. That was 1200 euro higher than the average price for the 46 foals sold last spring. Severin by Sandro Hit x Florestan, bred by Helmut Schlömer from Diepholz, was the most expensive youngster. Swiss customers paid 53,000 euro for the colt. 50% of the foals were purchased by foreign customers. Four of them sold in Sweden, Switzerland and the Czech Republic.