The Future of Judging according to Wayne Channon 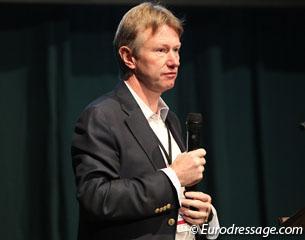 Judging is not the only big issue in dressage but it is probably the most controversial.  Our top judges are well trained, very knowledgeable, extremely experienced and totally competent.  Yet, so often, even they get it very wrong.

Take a recent example, the World Cup Qualifier in Mechelen, Belgium, the difference between the highest and lowest score for the technical mark of the freestyle for one competitor was 10%.  So one judge thought the test was worth 65.5% and the other 75.5%!  This wasn’t 10% of the total mark but the difference in the TECHNICAL mark!  If it were the artistic mark I could have well believed it – I think judging the artistic marks is more of a guess than an art, we are not even close to the realms of accuracy there.

For years, riders, trainers and judges have recognised this problem and, thanks to the FEI, for the first time in history we have a solution in sight, more about this later.  But first, we need to look more in depth at the origin.

Firstly, I don’t believe that “where you sit” makes all the difference.  David Stickland, with his analysis of almost 2,000 tests, has firmly exploded that myth – there is no significant difference between the marks that judges give whether they sit on the long or short side.
Secondly, I don’t think it is our judges.  Most of them are excellent.
I believe there are many problems but the main two can be traced to the inadequacies of our system and to the pressure that is put on judges to get it “right”.

The glitches in our system have always been there.  We notice it more now because the Internet shows everyone in the dressage world all the scores by judge and often the actual tests.  With a much more knowledgeable dressage public, we can openly see the problems and criticise what is thought to be poor judging execution.  In fact, judging is certainly better now than it has ever been.

The good news is that we have a lot of judging talent.  We have many very experienced, well educated and dedicated judges.  But my view is their hands are tied behind their backs.

To understand what I mean we have to look at some of the shortcomings of our present system:

Conformance Our judges have enormous problems of their own.  If they do not conform to the opinions of their judging leaders then they will not be allowed to judge at important competitions such as Championships or Olympic Games, they will not be promoted, they will be kept in the background.

Judges are rewarded for caution.  No judge wants to be the only one to give a 9 when the rest are giving 7s.  It makes them look like they are wrong – even when they are right.  So what often happens is that they all discuss the marks they gave and then someone will say that they were thinking of an 8 but gave a 7, they all agree and the next time they all start to give 8s because they know their colleagues will probably be doing the same.   This is why it is almost impossible for a newcomer to win a Grand Prix.  This is also why it is almost impossible for a top competitor on a top horse to suddenly come last.  This is what I think of as the “Super Tanker Effect” – you turn the wheel and 5km later the ship begins to turn.  To be a sport, dressage has to be as manoeuvrable as a dingy.  The crowd has to be on the edge of their seats to see who will win – it cannot continue to be a foregone conclusion.

Only O judges can judge at Championships and Olympic Games To judge at a Championship or Olympic Games one needs to be an Official or “O” judge.  Being an O means you are part of a very exclusive club that has under 30 members – there is no exact number but it is limited by practice.  To become an O is not an examination; it is a blessing by the Dressage Committee.  Potential Os certainly have to qualify but it is not just that they are competent and sufficiently experienced they have to be selected.  This is a bit like saying ok, you have a Grand Prix horse, you can ride a decent Grand Prix test but we will not allow you to become a Grand Prix rider until we invite you.  Doesn’t sound fair to me – it has to open to all who are able to qualify by competency.

Invitations to judge One of the greatest challenges to rising talent is simply getting invitations to shows to judge.  To get that invitation they have to keep other judges and show organisers happy.

Well, although there have been proposals talked about for some time now, none have actually materialised.

Nonetheless, we do have good news!  Whilst I do have a personal view on potential solutions, more importantly, the FEI has taken the lead here and set-up the Dressage Task Force whose job it is to look at this, and other major issues, and make recommendations on the best course of action.

I have total confidence in the Dressage Task Force as it is comprises all the major stakeholders in our game: riders, trainers, judges, organisers, owners and chef d’équipes.  Every member is not only experienced, they are experts and they will call in other any further expertise necessary to be able to recommend the right course of action.

I don’t think it will be quick, but at last, Dressage is going to sort itself out!