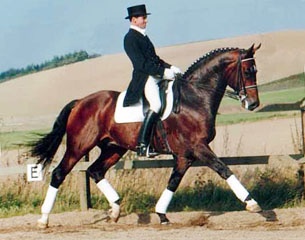 The renowned Danish warmblood stallion Rambo has passed away. The 23-year old Elite stallion suffered from heart complications and was humanely put down yesterday October 16, 2009.

Rambo was bred by Ole Pedersen from Suldrup, Denmark, and was by Racot out of Vigga (by Ibikus x Colombo). Since 1999 he was owned by Richard Freeman of Oak Hill Ranch in Folsom, Louisiana, USA.

Rambo was licensed in 1989 and received the silver medal at the 1990 Danish Stallion Licensing in Herning. In 1991 and 1992 he won the Danish Young Horse Dressage Championship as a 5- and 6-year old. By 1995 Rambo started competing at FEI level and in 1998 he had reached Grand Prix level.

Under Leif Sørensen, Rambo was short listed for Danish team for the 1998 World Equestrian Games in Rome and the 2000 Olympics in Sydney. After Rambo's arrival in the U.S. he was trained and competed by Heather Blitz. In 2001 the combination became the Region 3 Grand Prix Champions. "He affected my life in an indefinable way and taught me so much," Heather Blitz commented on the passing of this beloved stallion.