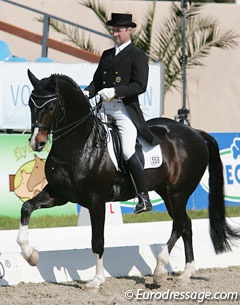 Ira Denkhaus of Gestut Kempke Hof has sold her number one stallion Sancisco OLD to a German dressage rider. The black Sandro Hit x Rohdiamant offspring, who has been trained and competed up to Grand Prix level by Ronald Lüders, has left the farm on Thursday to move to his new home.

Eurodressage checked whether the rumours were true that Sancisco sold to Gestut Sprehe, but they are not, nor is the horse in training with the Koschel family.

Sancisco is a 9-year old Oldenburg stallion bred by Elisabeth Münstermann. In 2005 he won the 30-day Stallion Performance Test and in 2006 the 70-day performance test in Prussendorf with 127,29 points. In 2007 he competed as a 6-year old at the Bundeschampionate but only finished 20th and did not make it to the Finals. In 2009 the black stallion competed in the Finals of the Nurnberger Burgpokal and in 2010 he was a finalist in the Medien Cup.

His new owner has set his/her goals on the 2012 Olympic Games and Sancisco will be the partner for OG contention.