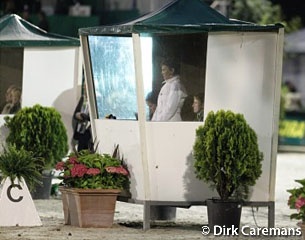 Since 1 January 2011 the use of half marks has officially come into effect. As of that date all judges have the option to use half marks for both movements and collectives. Two months after its introduction

and with several national and CDI's shows already down the belt (CDI Zwolle, CDI-W Amsterdam, CDI Dortmund, CDI-W West Palm Beach, etc.), our prestigious and highly esteemed judges' panel so far seems to be half way there.

The excellent score service provided by the German company Hippo Data brought to light that barely any of the judges are applying the half marks while scoring at World Cup Qualifier in Neumunster, Germany, last weekend. The sparse use of this more refined scoring system raises questions.

The FEI objective of the half point system is for the panel to give more accurate and consistent results and allow more flexibility for the judges. In principle scores will become more accurate and commensurate with the performance of the riders. The use of half marks was extensively tested in 2010 and apparently the experience has been that "judges did not need any additional training to introduce the use of the half marks, many finding it allowed a finer ranking in the collective marks," as explained by the Australian Equestrian Federation.

So what happened in Neumunster?

A closer look at the Grand Prix class in Neumunster scores brought to light that only German judge Katrina Wüst has been consistently using half marks. The numbers are absolutely shocking if you lay them out statistically.

18 Grand Prix riders each get marked on 37 movements (including collectives) by five judges. This means that each judge (and the panel consisted of Tornblad (DEN), Withages (BEL), Wust (GER), Rockwell (USA) and Holler (GER)), gives a total of 666 scores for the 18 riders in the Neumunster Grand Prix. All judges together gave 3330 scores in that Grand Prix class.

But let's mainly keep in mind that each rider gets a total of 185 marks from all five judges together for their one ride. Four riders did not receive a single half mark (Salzgeber, Langehanenberg, Hofmann, Koppelmann); all the others received either one (Minderhoud, Lindh, Bondergaard) or up to 10 half marks in total in their test (Zu Saeyn-Wittgenstein). Judge Kathrine Wüst tapped in the most half marks, giving 50 in total out of her 666 marks. This means that 7,5% of all her scores were half marks.

A Judge's Point of View

In a pursuit of knowledge we got in touch with judges Leif Tornblad and Peter Holler to ask what happened in Munster. The fact that the logistics were not in place needs pointing out. "In the beginning in Neümünster the computer did not accept half marks (small tour)," Tornblad explained. "The national German classes could not be judged with half marks (so we were told) because rules are not yet changed in Germany yet."

Tornblad clarified his low use of half marks as following: "I did use half marks in the Grand Prix and in the freestyle, also on the technical side. In the Grand Prix only on a few horses and movements which I felt were very much a little more than six but not really a 7. When marks are lower because of mistakes, etc.  I prefer to use only full marks and the same goes for very good movements. It is more gratifying to give a 9 than a 8 ½ or an 8 instead of a 7 ½ I feel. There were not so many competitors in each class in Neümünster and maybe in bigger classes with more than 20 riders it will be even more useful with half marks."

We asked Mr Holler if it is possible that the judges are just "not used" to giving half marks and have to adapt themselves to this new method of scoring. "The use of half marks is new this year but it was tested several times last year. I was also involved in these tests and actually I did not find it very difficult to get used to the idea of half marks. It is just a matter of concentration and practical experience." Holler explained. "So in the test competitions I gave a lot of half marks just in order to try and find out whether it would be useful to do so or not. For myself I noticed that I can judge in about ninety percent of the cases very easily without the half marks. Ten marks are in most cases enough to judge the movements and excecises properly. Especially as the use of full marks leads to very clear decisions.

It strikes that the two judges we spoke to are no major fans of the new modus operandi. "I belong to the group of judges who really do not think it is an improvement with half marks and I have never asked for it," Tornblad admitted. "I was involved in the test in Aachen last year and I have not seen any real advantage of using half marks. This does not mean that I will not use it, now it has become a rule, but I will limit the use to when I am in doubt whether to give a lower or higher mark. Maybe in the future  judging becomes so sophisticated that I can start using a 20 scale to graduate each movement, but I think the 10-scale causes enough difficulties as it is."

Despite Holler's low use of half marks in Neumunster, he emphasized the system's advantage for more precision in the scores. "In about ten percent of the cases the half marks are useful in order to make the judging even more precise. In my opinion this is especially the case for marks between five and six and also for marks above seven. A good example is the mark for the rider's seat. If you think the rider sits really well for example so that you would give him an 8 for his position but you also think his aids in parts of the test or for a certain movement were not always efficient enough you could for example give him 7.5 to point out the deficit. I also think that half marks can help to make the judgement even better for some technically very difficult movements like pirouettes, zig-zag-half passes or also piaffe and passage."

However, there seems to be a catch-22 attached to the new system. Especially young, inexperienced judges are timid to use the full scale of scores and half marks might even stimulate this sitting-on-a-fence even futher. "Less experienced or weaker judges can be tempted to avoid a clear decision by using them," said Holler. "I am pretty sure that they will be used more and more as time goes by but also in future the majority of the marks will probably be full marks," he added.

"The Majority of the Marks will Probably be Full Marks"

Holler's diatribe might be indicative of a trend we are going to witness in scoring in the future., but judge Wust raised hope that an effort can be made at being more accurate and precise. One has to keep in mind that our five-star judges have had years of training to give whole marks and it might be more difficult for some to move away from this learned behaviour.

"Judges of all levels need further training in being more accurate, but there might be some gentle reluctance especially from those who don't believe in the necessity," said Wayne Channon, secretary-general of the International Dressage Riders Club and major proponent of the half-mark system. "Some are not experienced enough judges to be able to differentiate to that level. Maybe it should be part of the test to become a 5-star that they can judge to that level of accuracy," Channon suggested.

Having been trained for years in rounding up and down scores, some judges might face slight resistance to break the habit. By instating the half mark system the Rubicon has been crossed. There's no turning back as this systemic change is an improvement to judging. It allows for greater accuracy, which was missing. Let's give our judges some time to get adapted to these subtle scores but stay vigilant as well to ensure their effective use will be propagated and stimulated.