Rain Down on Broholm 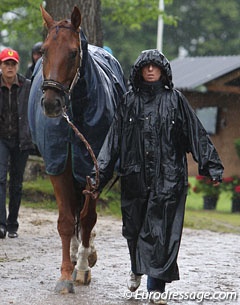 I'm sure everyone faces moments in his or her professional career that s/he doubts what the hell they are doing. Luckily these moments of hard-core doubt are very rare, yet unfortunately it struck me on Friday at the 2011 European Junior and Young Riders Championships in Broholm, Denmark. What follows now is a brief moment of complaint about the disadvantages of the job I love to the bone.

I'm currently staying in a modest Bed & Breakfast which turns out to be the lodgings closest to the show grounds. It takes me three minutes to get to the venue and this is an absolute luxury. However, breakfast is only served after 8 (and the show starts at 7.30 AM) and the promised internet connection turns out be a major disappointment. I have a room the furthest away from the wifi router which makes my "chamber" out of reach for internet connection. This means that at 6 'o clock in the morning I'm sitting outside on the hotel courtyard in the cold to upload my stories and photos (which takes about an hour to do so if you have photo albums with 25 pictures). The past few days this was not really an issue,  but this morning I woke up, opened the window curtains with a big smile as I was at one of the coolest competitions of the year.. but that smile was immediately wiped off my face when I noticed the drizzle. I went outside with my equipment, dragged a heavy white chair under a tree and sat partly sheltered from the cold rain uploading my work, worrying that the rain drops could damage my laptop.

It took longer than I expected to get everything posted so I missed the first rides of the day. By the time I got to my car the drizzle turned into solid rain and while I was driving to the show I was honestly thinking by myself: "my god, I want to go home." The talk of the morning was that the judges had arrived 15 minutes late for the class. The first rider to go, Alexa Fairchild with Totall Tip Top, was all ready to do her test at 7.30h but she was not allowed to enter the ring as the judges were not even on the show grounds yet. Apparently a miscommunication took place between the organization and the judges, who were told that the test started at 8 AM. Very strange that this happens at an international championship! 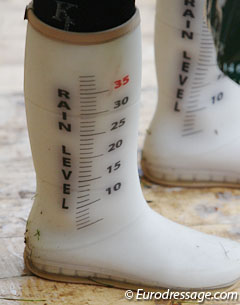 You try to keep as positive an attitude as possible and pray that the rain will stop soon. Everytime you saw bright spots appear in the sky you would think "it's almost over" but that didn't come to be. It rained all day and I'm allowed to say that in the afternoon it even poured! There was hardly any spectators at the show and the walk paths for the horses from the warm up to the show ring quickly turned into mud. The few people round the arena were the parents and team mates all dressed up in several layers of jackets and wellingtons.

I felt totally unmotivated to make an effort at taking photos as the pictures of soaked horses and riders are not at all appealing. During the breaks I took deliberately long coffee breaks and heated myself with food and drinks of all kinds: pasta with meatballs followed by hot chocolate with whipped cream. That was my lunch. Bye bye diet!

I must admit that time went by quicker than I expected. The afternoon class was quite surreal. Twenty-nine riders competed in the Young Riders individual test and they order of go was the reverse order of the results list of the team test. Even though maybe not the strongest scoring combinations were to appear today, it was staggering that the "winning" score after the first half was only 63.105%. Maybe the judges were equally disheartened by the rain and maybe the somber down pour had dampened their spirits. Ride after ride you only saw 50% scores appear on the board. Yes mistakes were made but they were not so dreadful as the scores reflected. Generally you could say that all scores were 3% too low. So the winner could have got a 65-66% as well as several other higher placed pairs. I wonder if they are going to apply the same level of strictness tomorrow for the second half, or will those riders just be lucky and get a "normal" assessment again?!

The low scoring was a topic of discussion at the end of the test in the one of the tents on the trade fair. While I was drinking a large hot tea, which I also used to warm my pruned hands, I heard riders and parents from several nations discuss the marks.  I gathered my energy again to stomp back outside in the wet and cold to photograph the seven riders in the Under 25 competition, which was won by Spanish Morgan Barbançon on Painted Black (by Gribaldi x Ferro). 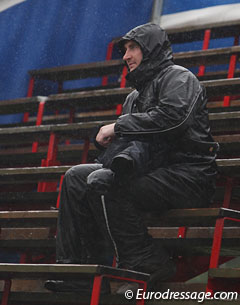 After a lackluster prize giving ceremony I was very happy to drive to the hotel straight away to go to my warm room. I was soaked all the way to my undies from 11 hours of non stop rain. I also worried about food again. The B&B does not serve anything and the town it is in is just two streets with no shops nor restaurants. All the food places at the show were closed and I heard my empty stomach roar again. The field where I had to park my car had turned into a mud-pool and a tractor was pulling out cars. The sight of my car being stuck in the dirt brought my mood to an all-time low. I tried to get out but my left wheel dug such a deep hole in which my potbelly big at home would like to roll. I got out of the car, grumbled and ground my teeth while walking to the tractor guy who was rescuing people in the field 500 meters away. He had three cars to tow there and then would come to us. I got impatient and tried again to get out and miraculously that worked! Some heavy duty maneuvering and slipping brought me out of this mud-hole and onto the street. Hooray!!

My room at the B&B was so welcoming. I stripped out of my soaked clothes, but on warm dry ones and started downloading photos and writing this blog. By 11.30 PM  my jacket, which I had hung above the burning radiator round 19.30, was still half wet. Even though I was so hungry I couldn't think straight, I distracted myself with work and movie (Red Dragon with Ralph Fiennes (habba) and Anthony Hopkins) and as improvised dinner I feasted on the two small oatmeal cookies I found as in my car. Now all that was left to do was pray that tomorrow will be a dry day.

Back to the 2011 European JR/YR Championship Index